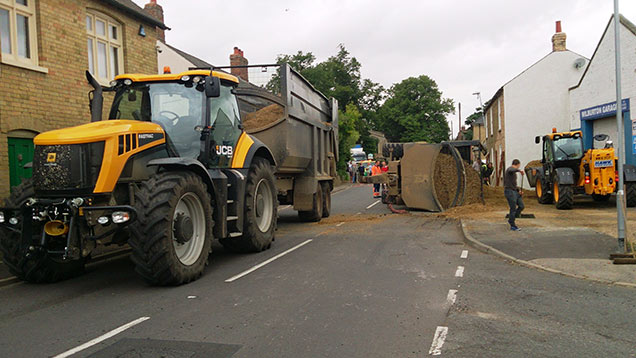 Councillors in Cambridgeshire have called for tractors to be banned from a village high street after a huge trailer overturned and smashed into two houses.

The crash happened at about 9am on Sunday (26 July) in the centre of Wilburton village.

The trailer overturned, hit the houses and deposited its load for 40 yards as it skidded down the road on its side.

Windows and doors in the properties were smashed and a lamp post was bent over.

For one of the home owners it was the second time their property had been hit by a tractor in four years.

In January 2011 a tractor hauling a load of carrots ploughed through the walls of the roadside house.

Local councillor Bill Hunt told the Wisbech Standard that tractors used the route as a short cut and that he feared more accidents would happen.

He described the situation as a “hell of a disaster just waiting to happen”.

Mr Hunt said villagers were at the end of their tether and while HGVs avoided the through route it was time to stop unnecessary tractor movements.

He will be asking the county council to explore regulations to stop tractors using the village.

A Wilburton resident echoed the councillor’s call and told the newspaper: “It is time the tractors stopped coming through Wilburton.”

But a Facebook commentator refused to blame tractor movements.

“Likely an impatient car driver pushing it and barging through causing the tractor to brake and swerve causing the accident; not always the tractor driver’s fault,” the comment said.