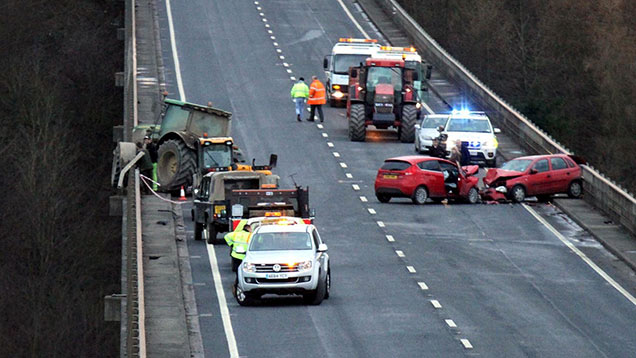 A tractor was left hanging off the side of a bridge after a dramatic collision involving two other cars.

The accident closed the Chirk bypass on the A5, in north Wales, in both directions on Monday (19 January), causing traffic chaos for commuters.

Emergency crews were called to the scene shortly before 2pm. They found the John Deere tractor’s wheels were dangling over the edge of the viaduct.

The Welsh Ambulance Service said a woman, who driving one of the cars, was treated in hospital for minor injuries.

The driver of the tractor had a lucky escape and did not need treatment for any injuries.

A North Wales Fire and Rescue Service spokesman said: “We were called at 1.54pm to a road traffic collision involving two cars and a tractor.

“Three fire engines were called out, two from Wrexham and one from Llangollen.

“One casualty was extricated and two others were checked at the scene.”

The road, which is the main route from Shropshire into Wales, is not expected to reopen until Wednesday (21 January) to allow barrier repairs to be carried out.