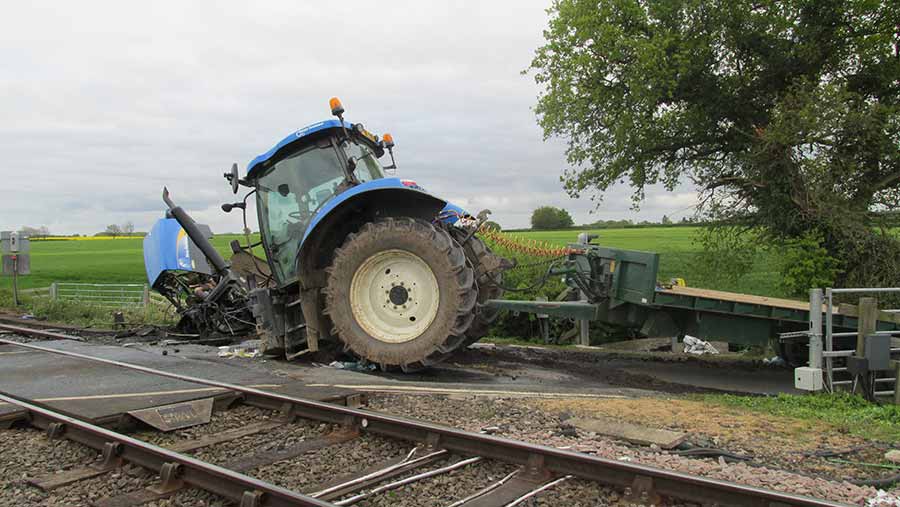 A man who drove a tractor into the path of a train travelling at 65mph has been sentenced to 150 hours of unpaid work.

The tractor was sliced in half after it collided with a passenger train service that was travelling from Harrogate to York.

York Crown Court heard that at 6.15pm on 14 May 2015, Mr Doney had not followed the correct procedures at Oakwood Farm crossing in Flaxby. He opened the gate and drove across the tracks into the path of the train.

None of the 66 passengers or three staff were seriously injured. But although the train driver saw the tractor and quickly applied the emergency break, he suffered whiplash and back injuries.

However, the court heard that since the crash not enough has been done to upgrade the level crossing to prevent further rail crashes.

An investigation by the Rail Accident Investigation Branch (RAIB) criticised Network Rail for not implementing previously recommended improvements, including instruction signs on how to use the crossing safely.

The report found the warning lights for approaching trains were too small and should be changed – but nothing has been done. Meanwhile, the crossing gates can still be opened as trains approach.

“I am quite satisfied, sadly, that this was an accident waiting to happen,” the judge said.

“I am further satisfied from what I have heard in this court this morning that the rail operators really must as a matter of extreme urgency attend to the concerns that have been raised, not only from the landowner, but from the rail accident investigator’s report in respect of this collision.

“It is a mercy no-one was seriously injured or killed. Plainly there could have been carnage had the train been derailed.”

British Transport Police also said it was very lucky nobody was killed in the incident.

Chief inspector Glen Alderson said: “It is astounding that no one was seriously injured or killed in this incident.

“My thoughts are with the train driver, who said driving past the crossing for the first time was ‘horrific’ for him and that he continues to suffer psychologically and emotionally from what must have been an extremely frightening experience for all involved.”

Mr Doney’s actions caused “massive disruption” and costs to the rail infrastructure. The crash closed the railway and nearby roads for hours and the incident cost Northern Rail £114,000 and Network Rail £3,660.

“We could so easily have had a far more serious incident on our hands such as a derailment or multiple injuries,” chief inspector Alderson added.

Mr Doney was sentenced at York Crown Court on Monday (5 December). He was ordered to pay £300 costs, a £85 victim surcharge and ordered to complete 150 hours unpaid work and undertake a 12-month community service order.

Since the incident, Network Rail said it had worked with the Office of Road and Rail, the independent rail safety watchdog, as well as the authorised user at Oakwood Farm to improve safety at the level crossing.