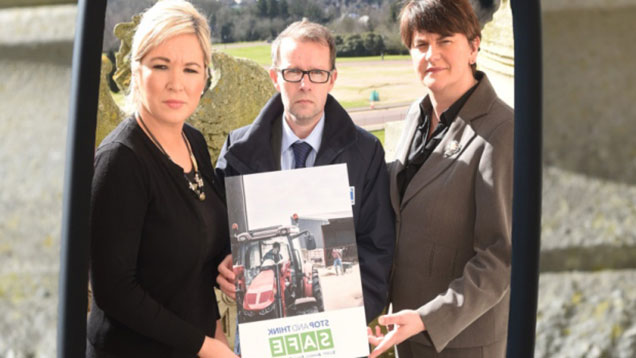 A hard-hitting TV advert to promote safety around farm vehicles has been launched by the Farm Safety Partnership in Northern Ireland.

The ad features the possible aftermath of the accidental death of a young boy on a farm. It stresses that such accidents can be avoided by putting in place simple safety measures.

“This is a powerful advertisement with a hard-hitting message that challenges us on an emotional level. However, we can’t shy away from the realities of the total devastation that can befall a family after a fatal farm accident – particularly one involving a child,” said NI health and safety minister Arlene Foster.

“While awareness about safety is high across the industry, farmers must step up and take responsibility for making sure they follow safe working practices at all times.”

Despite progress made by the partnership in recent years, last year seven people lost their lives on Northern Ireland’s farms, taking the total number of deaths since 2000 to 98.

Since 2000, in Northern Ireland there have been 14 fatalities related to poor visibility on machinery – four of which were children.

The new ad has been released as part of the “Stop and Think Safe” partnership farm safety campaign, which focuses on the four main causes of fatalities on local farms – slurry, animals, falls (from height) and equipment (SAFE).

Since the year 2000 there have been 98 farming deaths in Northern Ireland relating to the following causes:

Northern Ireland’s agriculture minister Michelle O’Neill said: “Farmers have told us that they need to hear powerful safety messages and there is no doubt that this ad delivers.

“Anyone who cuts corners around safety needs to understand that they are risking tragic consequences that will leave a trail of heartbreak for themselves and their families.”

Ulster Farmers’ Union president Ian Marshall added: “As a farmer, I understand that we can’t underplay the realities of farming when it comes to safety.

“For many, farms are also family homes and this new advert underlines the need for all of us to play our part so that avoidable accidents like the one portrayed can be avoided.”