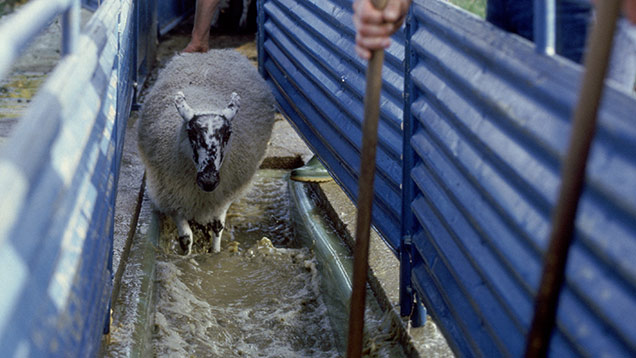 The Farmers’ Union of Wales (FUW) has backed calls for an independent inquiry into the effect of organophosphate (OP) sheep dip on human health.

FUW president Glyn Roberts has written to Defra minister George Eustice urging him to establish an inquiry on behalf of farmers who believe they were poisoned by the chemicals.

“Several hundred farmers from across the UK have cited debilitating health problems from exposure to organophosphate concentrates,” said Mr Roberts.

Numerous peer-reviewed scientific publications had now demonstrated a credible link between the use of OP sheep dip and producer ill-health, he added.

Mr Roberts said: “We now believe the evidence supporting the establishment of an independent inquiry into organophosphate poisoning is incontrovertible.”

Farmers were required by law to dip their sheep with OPs to control infestations of ectoparasites such as sheep scab before mandatory dipping came to an end in 1992.

But government documents revealed under freedom of information requests suggested officials were privately warned of the dangers farmers faced through exposure to OPs.

Dr Nakielny said: “By failing to provide adequate advice and health warnings to those who were mandated to dip their sheep, successive governments effectively increased the exposure of tens of thousands to a dangerous chemical.”

While OPs were a valuable tool against sheep scab, the apparently blasé attitude of past governments had led to the unnecessary exposure of entire families to the chemicals, she added.

“Dipping on a family farm meant all hands on deck, with children and adults all pitching in without any idea of what they may have been exposing themselves to,” said Dr Nakielny.

Led by Lancashire farmer Tom Rigby, the Sheep Dip Sufferers Group is campaigning for official recognition, better diagnosis and treatment for all those affected by OPs in agriculture.

In a Westminster Hall debate last month, Newport East MP Jessica Morden also urged Mr Eustice to set up an OP inquiry, saying any investigation should be independent of Defra.

OP sufferers included her constituent Stephen Forward, from Undy, who started dipping sheep at the age of 17 on his father’s farm in 1979.

Ms Morden added: “I think he and others deserve an apology from the government that he has had to live with the effects for decades.”

Responding at the end of the debate on behalf of the government, Mr Eustice said he was sympathetic to farmers who were suffering ill-health but rejected calls for an inquiry.

The government was not hiding anything, said Mr Eustice, who said he would be “more than happy” to meet farmers to discuss their concerns.