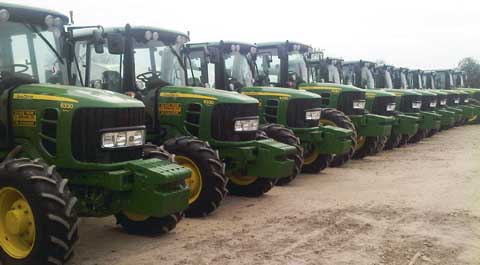 Organising over 100 tractors and 550 workers is no mean feat, but that’s exactly what they do at the Jersey Royal Company. Oliver Mark went to find out how it’s done.

As you come in to land at Jersey airport there’s no mistaking that this is prime potato-growing land. It was mid-March and a patchwork quilt of plastics already covered a big proportion of the island’s 45 square miles.

The business was formed by the amalgamation of five farming companies in 2004, before becoming the Jersey Royal Company in 2008. It is one of about 20 potato producers on the island and grows 1,800ha (4,500 acres) of Jersey Royal potatoes every year, making it the largest farmer on Jersey.

The company produces 95% of its 25,000t of potatoes each year itself, with the other 5% made up by several contract growers. The company also owns the Ernie Le Feuvre Ltd machinery dealership.

Field sizes average 0.8-1.2ha (2-3 acres), not much more than a Surrey allotment, so most of the machines used have to be pretty small scale. Farming such small fields requires mind-boggling manpower, though.

“Jersey Royals are grown in every field every year,” says operations director Glen Hamel. “We can do it because the soil here is pretty fertile, and we don’t suffer too much with infection. It’s one of the only places in the world this can be achieved.”

Over the summer a green crop is grown – usually maize, barley or grass – which is either sold or traded with neighbouring farms or mulched to improve soil organic matter.

Some 26ha (65 acres) of greenhouse-grown potatoes are planted in October ready to hit the market in March. Outdoor sowing starts in January on the steep south-facing slopes along the coast.

Workers on the slopes use a winch and cable to pull a single furrow plough up the hill to turn the soil before hand-planting seed.

The flatter inland fields are more vulnerable to frost damage so are hand planted later. While hand-planting the entire acreage requires massive amounts of labour, it does mean seed can be planted very accurately.

A vast fleet of machinery is involved in seed-bed preparation. In the space of a day, a field can be turned from a standing cover crop to sheeted potatoes.

Every field is ploughed using one of the fleet of 18 four and five-furrow Lemken ploughs. Fertiliser is then put on before a JD 6630 with front-mounted subsoiler and Brevi power harrow break up the clods.

A Morrish crawler is then used to form a small furrow. Designed by Tiverton firm Morrish for ditching duties, the machine, powered by a 1,500cc Kubota engine, scoots up and down fields using front-mounted hoes to open furrows.

Rear discs on a Morrish or 54hp JD4520 close the furrows once the seed is planted. Finally, a slotter makes channels to hold the plastic sheet down.

Most of the lifting takes places over seven weeks in May and June with as many as 550 people split into three teams to help with lifting and grading.

The arduous task of hand-lifting crops on the coastal slopes begins in April, using a winch with a single furrow plough to unearth the potatoes. This crop can carry a premium of up to £4.40/kg, so it’s worth the legwork.

Grading, washing and packing takes place in huge packhouses, with pre-pack lines capable of each processing 90 packs a minute. The kit comes at a price though – a recently replaced labelling machine cost an eye-watering £38,000.

The narrow roads on the island mean any tractor roadwork has to be carefully planned. All tractor drivers have set routes in advance to form a one-way system to avoid congestion.

Having 100 tractors means the company gets through its fair share of fuel, though a Merridale recording system helps them keep a grip on it. Each tractor driver has a pincode to use the diesel tanks so good records are kept of how much fuel each tractor is guzzling.

A tight rotation policy keeps the John Deere tractor fleet in tip-top condition. Tractors average about 1,000 hours a year and are replaced every four years.

Average tractor horsepower within the company (and probably on the island as a whole) is a modest 110hp. The workforce includes 16 full-time mechanics that do all servicing and maintenance in four separate workshops.

Expansion in the future is limited, not least because land in Jersey is at a premium. It would need a Manchester City-style deep-pocketed oil tycoon to afford to buy enough land to increase production by any substantial scale.

“Buying more land is almost impossible as it swallows too much capital,” says Mr Hamel. “Current prices are about £16,000-20,000 an acre”. The cost means there are very few major landowners on the island. Most of the Jersey Royal Company’s land is rented on a long-term lease and only 10% owned.

The Jersey Royal Company bought the Ernie Le Feuvre dealership in 2008. It was a decision taken mainly through convenience as the businesses runs a fleet of 100 John Deere tractors.

The firm was started in 1982 by potato farmer Ernie Le Feuvre, who was unimpressed by the lack of machinery choice on the island. He began bringing in equipment direct from manufacturers for himself and neighbouring farmers, starting with Marshall tractors.

Between 1986 and 1988 the dealership took on the Renault tractor franchise, but the major change came when Renault scrapped its small tractors in ’88, leaving a gap to fill. And then came John Deere, which has enjoyed considerable success on the island, with a 90% market share during the ’90s.

Mr Le Feuvre travelled to most European machinery shows on the hunt for machinery best suited to Jersey farmers. For that reason, Lemken ploughs and Breviglieri power harrows have become the implements of choice for most potato growers.

New brands face a challenge when it comes to selling on the island, though.

“There’s a bit of a small-island ethos here, where most people run the same machinery,” says the manager of Ernie Le Feuvre, Richard Noel. “It makes sense though, because too many makes would make spare parts harder to come by.”

There are Claas, New Holland and Massey Ferguson dealers on Jersey. In 2009 39 Deere tractors were sold, compared to three of each of Claas, MF and New Holland. In 2010 there were 20 Deeres sold as well as six Masseys and six Claas tractors.