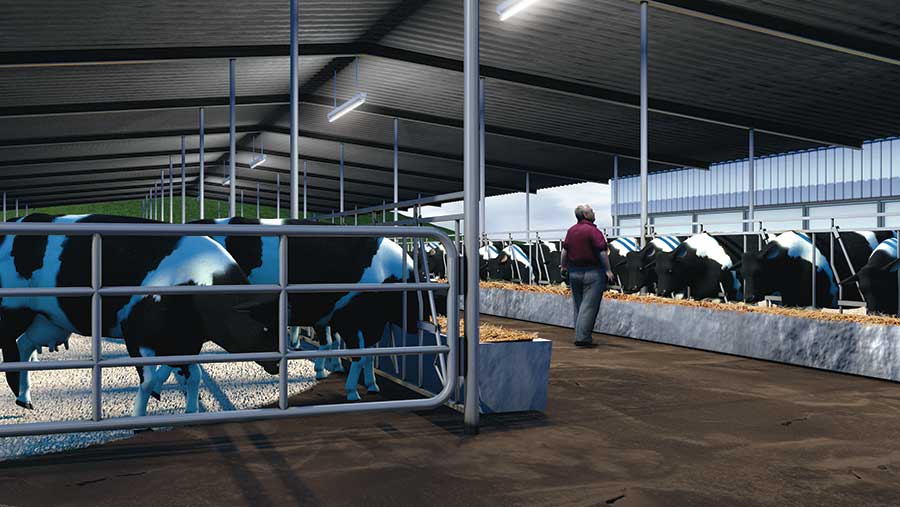 Like many, Savills’ model dairy farm is suffering the after-effects of a prolonged milk price crash and what looks an all-too-brief recovery. We look the prospects for how the farm’s finances will perform in the year ahead.

While the year to 31 March 2018 is budgeted to be much improved, with a profit of £70,926, there are continuing cashflow concerns carried over from the previous year.

The budget for the current year is based on an average milk price of 28p/litre.  Half-year revision of the budget suggests the average price could exceed this, but this is dependent on the price for the second six months of the year.

Savills model dairy farm – what is it?

A fictional dairy farm, fully costed and based on dairy businesses advised by Savills. This allows scenarios to be modelled and their effects assessed.

Therefore the overall budget has not been amended, giving an overdraft at the year-end of almost £56,000, which is still £37,000 more than the position at April 2016.

By the end of the year to 31 March 2019, the UK is likely to have left the EU and the family has started to consider how the business will be affected.

“They have minimal control over milk price, but will be discussing with their milk buyer the action they will be taking to manage the effect of potential changes to milk and milk product imports and exports,” says Charles Skelton, a consultant in the Savills food and farming team.

“The most significant direct effect is the potential loss of Basic Payment Scheme [BPS] income .” The budget therefore excludes BPS income, currently claimed on 180ha and worth about £40,000 in the current year, or 1.9p/litre.”

Excluding this income from the budget helps the business identify how it will manage with a milk price effectively 1.9p/litre less than it is currently being paid.

The future of the actual milk price is uncertain, but the budget for the year to March 2019 includes an average price of 28p/litre.

However, within this the monthly price is assumed to change by more than 5p/litre, creating a variation in the monthly milk income of almost £9,000.

“Although BPS is important to the overall performance, the change in milk price has a much greater effect on the profit and thus the family’s confidence in the future. For every change of 1p/litre the profit and cash income alters by more than £21,000. They will therefore be considering routes to minimise the fluctuations,” says Mr Skelton.

This includes further focus on purchased feed costs and the potential to increase production of milk from forage, as well as a plan to look at volatility management tools in the spring.

The herd is budgeted to rise from 233 cows at 1 April 2018 to 266 cows by 31 March 2019. This will be achieved through the introduction of 109 heifers due to calve in the year and the sale of 76 culls and casualties budgeted to leave the herd.

However, this represents a 30% culling rate on the average herd size and so the family plans to reduce this and either sell 10-15 surplus heifers or expand the herd faster. This has not been included in the budget.

In the current budget the closing herd number is 20 head less than originally planned for March 2017, demonstrating the longer-term effect of selling both cows and heifers as a cash-management tool.

There is a budgeted improvement in the overdraft of £41,694 to end the year at £14,235. With no BPS income in the budget, this is a positive improvement and indicates that at the current scale and strategy, the business is sufficiently robust to withstand a loss of BPS, says Mr Skelton.

The business is on a non-aligned milk contract and was affected by the drop in milk prices in 2016.

This also provided an opportunity to turn a planned wholecrop wheat area into a grain crop to generate cash in the short term.

Practical measures this year have included tighter silage clamp management, ensuring good consolidation and swift sealing to cut waste and improve fermentation quality. Alongside this, clamp face management is being sharpened to further reduce waste and a forage review will be carried out early next year.

The business has set a target to reduce the purchased feed rate from 0.34kg/litre, to 0.32kg/litre this year and this will be reviewed after the end of March 2018 so new, realistic targets can be set for 2019.

At almost 1p/litre, vet and medicine costs are higher than for top-25% herds and are under review.

“Like many things in the past 12 months, vet and medicine was treated on a “needs must” basis during the cash crisis, but the family continue to work through medicine protocols within the herd health plan,” says Mr Skelton.

“The cost a head has not improved – this remains an ongoing issue. There are concerns that forcing a reduction could lead to health issues that could affect performance in the long term.

“Therefore the procedures will continue to be monitored with the goal of reducing cost a litre. If cost can be held and output increased, this may provide better long-term benefits than cutting out a cost.”

Yield continues to be lower than the owners would want to see for the level of input. “This is however hard to monitor while the herd is in a growth period,” says Mr Skelton.

An application for a Leader grant to fund improved handling facilities has been put on hold as part of a capital expenditure freeze for cash management reasons.

However, grant funds are still coming forward and this will be reviewed again in 2018. It will offer long-term benefits, but was not considered a priority.