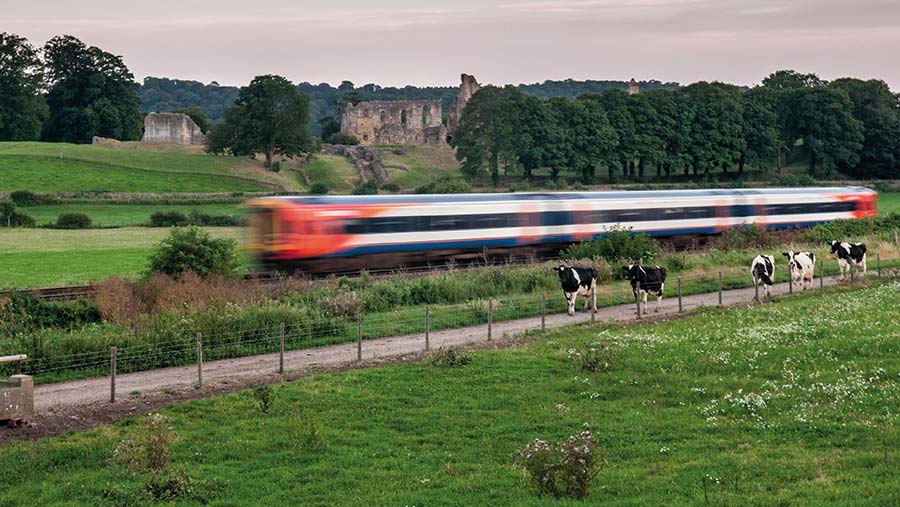 Figures produced by Network Rail in 2019 show that incidents involved more than 800 animals through the year. Of these, about 80 were struck by trains.

The downtime caused by the incidents led to hundreds of hours of delays to rail travellers, with passenger compensation claims exceeding £1m.

Livestock farmers also suffer the cost of lost animals and the trauma associated with a rail accident.

According to the NFU, breaches are often due to a failure in the fence line, which may be poorly maintained, not fit for purpose or broken down.

Responsibility for installation, maintenance and repair is included under legislation on keeping passengers safe from livestock and human incursion within The Railways Act 2005.

But in some circumstances, the farmer could be deemed negligent for any breaches, Ms Wilkinson says.

Network Rail says it uses fences along 20,000 miles of track to mark the boundary of its land and to act as a deterrent to prevent trespass and vandalism.

The organisation is committed to checking fences on a regular basis, usually annually.

Typically, fences are 1.8m high, but this is subject to the type of land use adjacent to it, Ms Wilkinson says.

Inspectors will identify what the land is being used for during annual checks and make recommendations if fencing needs to be upgraded.

Network Rail may, in certain circumstances, downgrade the fence type if inspectors think it is safe to do so.

Fences that are older or showing signs of deterioration will be replaced. However, if they are still sound, Network Rail does not have to carry out an immediate replacement.

Instead, the task will be added to schedules for any upcoming track maintenance to minimise disruption.

In contrast, a vulnerable or broken fence will be repaired straight away. This may be done in two stages, with a temporary repair carried out initially, followed by replacement within days.

While the upkeep of the fence line is down to Network Rail, there are degrees of responsibility on the landowner.

At the extreme, anyone who sees that livestock have escaped on to Network Rail property must call the emergency services immediately, Ms Wilkinson says.

Farmers must not go on to the line to try to retrieve stock. That is because, as well as the danger of being struck by a train, there is a risk of electrocution by the live rail.

Landowners also have a responsibility to carry out checks for potential breakdowns on fence lines.

In all reasonableness, Network Rail cannot be expected to check every section of its 20,000 miles of fence line at a frequency that would guarantee there were no breaches, Ms Wilkinson says.

Where a fence is broken and there is a risk of livestock escape, the farmer is responsible for taking steps to ensure the railway line is safe.

That may mean removing stock from the field and carrying out effective temporary repairs that will protect the safety of the line.

Network Rail must then be informed as soon as possible.

When carrying out regular checks, it is also important to contact Network Rail if the fence is worn or weakened, rather than leaving it until a routine inspection is made.

Network Rail cites landowners’ failure to report worn fencing as one of the major causes leading to livestock escape.

The livestock farmer also has a responsibility to alert Network Rail if the fencing is unsuitable.

This may be where a field has not previously been used for livestock and inspectors have sanctioned a more limited fence type, or it may be that the stock class changes. For example, switching from sheep to cattle will require more robust fencing.

In this situation, it remains the responsibility of Network Rail to provide suitable fencing. Farmers should therefore contact Network Rail and request improved fencing.

Network Rail warns that the process of upgrading a fence can take time. The request should, therefore, be made well ahead of the change to allow it to assess what is needed and organise the work to take place.

Fences erected in addition to the railway line’s boundary structure are solely the responsibility of the landowner.

Network Rail also warns farms that any parallel barrier should not be attached to its fence line.

This rule is to safeguard the existing fence and ensure the farmer’s fencing is not damaged if rail contractors have to remove it during repairs.

Is this an issue which affects you? To let us know if you have or have had a problem with railway line fences, email suzie.horne@markallengroup.com or call 020 8057 8454