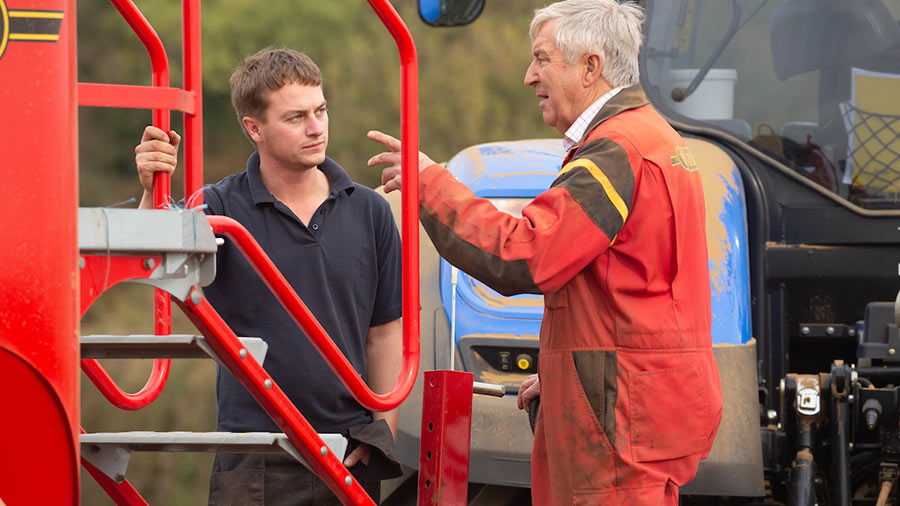 Taking the first step to start succession discussions may seem like the hardest part, but it’s also important to know how best to run the planning process and how much time needs to be invested.

Balancing the emotive topic and personal relationships with an important and complicated business transaction can be difficult, and this should be acknowledged.

However, starting sooner rather than later can help hugely, and additional support is available for anyone who needs it.

How can we make our family succession discussions most productive?

Prof Lobley: It’s really important that they are not just spontaneous discussions. They should be planned in advance and there should be an agenda.

Ideally they should take place in neutral territory, so not around the parents’ kitchen table, and maybe off the farm entirely.

It can often be helpful to have an independent facilitator there to take people through conversations that can be very difficult for many reasons. People have to face up to their own mortality, which we don’t like doing.

Notes should be made, with minutes and action points. Succession takes place over a long period of time and people can forget what’s been decided or why it was decided so it’s helpful to have records to refer to.

You can’t totally take the emotional side out of it but you also need a business-oriented approach.

Programme in a series of meetings over a period of time and work out what people want for the future of the farm and what they’re frightened of, and build a road map so the family knows where they’re going and what level of involvement they’ll have going forward.

What main issues crop up around succession planning and how can we avoid them?

Prof Lobley: People don’t plan for succession and they certainly don’t plan for it early enough. People think of it as something for the future and then suddenly they’re in their 50s or 60s and they haven’t sorted it out.

Because of that delay, and because farmers find it hard to delegate and share decision-making responsibility – as we all do – farmers don’t set up their successors to be successful. You need to learn the ropes and be involved in everything.

I think there’s still a massive gender bias in farming when it comes to selecting a successor. The default seems to be choosing a son as a successor.

From a business approach, to select the best business leader you want to draw on the widest pool of potential candidates, but that often doesn’t happen.

They’ll say “she’s not interested” but the children have been brought up very subtly directed towards specific gender roles, including that the son is going to take over the farm.

Sometimes the conversations don’t ever take place because an assumption has been made right off the bat.

It can go the other way – there is an assumption that the son will take over the farm but he might not want to. Some people will find that idea a burden. People may change their minds so keep the lines of communication open.

How should the older generation approach and view succession planning?

Prof Lobley: No one’s saying you necessarily have to leave the farm or stop working on the farm.

It may just be that you’re working slightly less or doing something slightly different, perhaps in more of an advisory role. The wealth of information and knowledge you have will still be valued.

Think about what you want your future to look like and start planning for it emotionally and financially.

You can acknowledge that it’s emotional and difficult but if you want what’s best for your family and your business you have to face up to it at some point.

Where do most people struggle with tax/financial planning?

Mr McCann: There are a number of tax breaks available to help farmers pass on their farm, whether that’s during their lifetime or on death, but there are traps that families can fall into.

Some areas that can lead to unexpected tax problems include: Where farms have diversified; land or buildings with development potential have been let out; or younger members of the family have set up separate businesses run from premises owned by the older generation.

From a wider planning perspective, many think that farm succession means handing over the assets and walking away. It can be helpful to think about the management and ownership of the farm as two separate issues.

The older generation may choose to hand over more of the day-to-day management while retaining ownership until a later date.

I’m struggling to treat my farming and non-farming children fairly. What are my options?

Mr McCann: It’s natural for parents to want to treat all of their children fairly, but in the context of a farming business fair doesn’t have to mean equal.

There are many ways to provide for non-farming children, including:

Why is it so important to have a will?

Mr McCann: If you don’t have a will, the law decides what happens to your assets on your death. This can lead to disputes arising within the family and can threaten the viability of the farm.

Having the right wills and agreements in place can help ensure that the ownership of the farm ends up in the right hands at the right time.