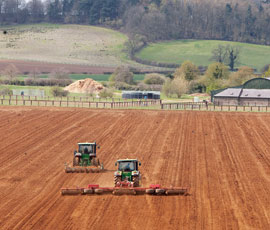 2011 was a year of mixed fortunes for UK farmers. Livestock prices and milk values improved, while combinable crop prices fell.

However, rising costs of production limited profits for all sectors. Farmers Weekly has teamed up with Andersons, the farm business consultant, to explore the outlook for 2012.

The UK’s economy continues to recover at a slower than expected rate. While agriculture may to some extent follow a different path from the general economy, it cannot escape the effects entirely, says Richard King, partner and head of research at Andersons.

“The main drivers of the economy have all been weak during 2011. Consumers have been unwilling or unable to spend, government spending is being constrained as a result of the coalition’s austerity programme and growth from the business sector during 2011 was less than expected.”

The eurozone’s troubles are especially important for UK farming. “Probably the biggest single determinant of farm profitability is the exchange rate between the pound and the euro. Even without a meltdown of the euro, sterling might strengthen against the single currency, perhaps to a trading range of €1 = 75p-80p (£1 = €1.25-$1.33). Overall this would be bearish on UK farm incomes.”

Expectations of interest rate changes normally tend to drive currency markets, but it seems safe to assume that the UK base rate will stick at 0.5% throughout 2012.

Of major importance for agricultural prices will be whether the world’s economies, and especially those of emerging nations, can continue to grow. “This will drive the demand for commodities. If global growth falters, then prospects for farming turn gloomy.”

Colleague David Neill estimates the UK 2011 Total Income from Farming (TIFF) at about £4.9bn, slightly up on 2010. However, 2012 looks less rosy, he says: “Rising fertiliser and fuel prices will continue to have an effect and other costs, such as labour, will also continue to increase.”

Overall, he puts TIFF for 2012 at about £4.5bn in real terms (2010 prices), assuming a gentle strengthening of the pound against the euro.

• Slow UK economic recovery for all businesses, including farming

* Commentary for this article is based on Andersons’ Outlook 2012. Copies can be obtained free of charge by calling 01664 503200 or it can be downloaded from the Andersons website – see ‘Publications’.

* The Andersons Centre will be running its popular series of spring seminars on the prospects for UK agriculture in more depth at locations around the UK in spring 2012. These briefings are aimed at farm business managers as well as professionals working with companies in the agricultural sector. Detailed overviews of each of the main sectors of UK agriculture will be covered as well as comprehensive discussion of the latest agricultural policy developments. For details go to The Andersons Centre.