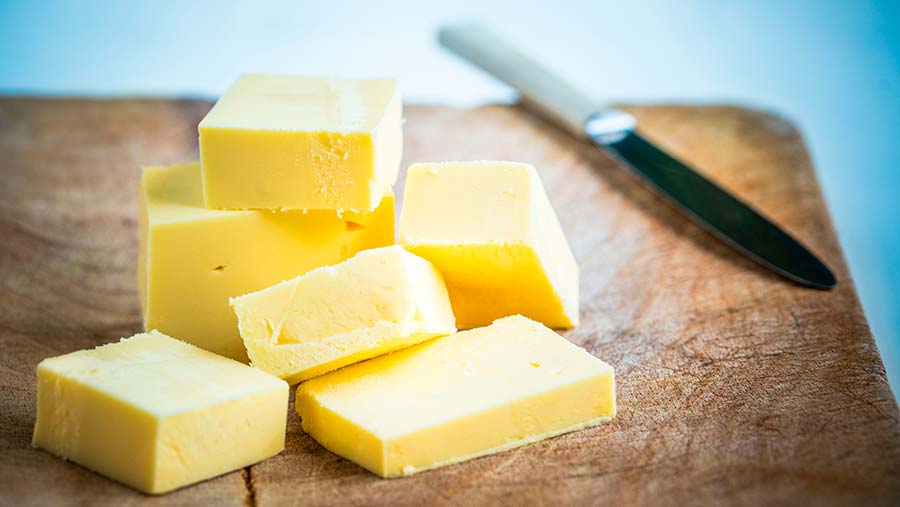 Butter prices have hit a record seasonal high after milk production grew at a slower rate than buyers anticipated.

In the 13 months since March 2017, UK wholesale butter prices have reached record seasonal highs every month, according to AHDB Dairy.

Although they remain well short of the overall peak of more than £6,000/t in August and September last year, the price for April hit £4,660/t.

AHDB senior analyst Patty Clayton said there was concern in the market about supply levels, with stocks still tight and milk production growing at a slower rate than anticipated.

“Earlier in the year there was an expectation milk supply would increase,” said Ms Clayton.

“But this hasn’t been the case – mainly because of the poor start to the growing season.

“This is causing a nervousness among the buyers and pushing up prices as they compete for stocks.”

In April, an AHDB report suggested deals had been struck where product was still needed to fulfil the orders, forcing buyers to venture into the spot market.

The effect on prices was marked and they rose quickly from £4,200 to hit the record average for the month.

As well as the questions over future supply, a further driver for the rising price has been stronger consumer demand for fats.

Several studies questioned the link between saturated fat and heart disease and food trend analysts suggested that consumers had returned to using butter because of a popular belief that it was a healthier alternative to margarines.