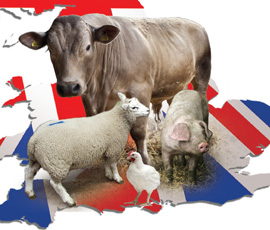 Backing British farmers is a major issue for shoppers, according to research for one of the country’s biggest retailers.

Supporting British growers and livestock producers is second only to corporate responsibility when it comes to consumer concerns, said Justin King, chief executive of Sainsbury’s.

Consumers believed that if food could be supplied from the UK, it should be – especially when they wanted it to be safe, healthy, fresh and tasty.

Sainsbury’s came under fire from farmers last year when it announced plans to drop the British Farm Standard’s Red Tractor logo from its own-label food.

At the time, the retail giant insisted it remained committed to British farmers but customers were confused by too many logos on packs.

Mr King said Sainsbury’s continued to source 100% of the flour for its in-store bakeries from Camgrain, the farmer-owned central storage co-operative.

The supermarket was also the country’s largest retailer of top fruit. It had a 30% market share and was encouraging growers to replant orchards.

Sainsbury’s also ran its own producer groups, including for dairy farmers.

Asked about the retailer’s stance on bovine TB, Mr King rejected the idea of a “badger friendly” label for milk from farms not involved in the badger cull to combat the disease.

“It would be fundamentally dishonest – unless you had an entirely segregated milk pool, not just for your milk but also for your other dairy products,” he told the audience at Manchester Town Hall.

“I don’t think any of the major retailers can make that claim in a way that truly represents what consumers might understand it to mean.”

Sainsbury’s had been asked to boycott farms that were in the designated cull trial areas.

But farmers in those cull areas were there by an accident of geography. Sainsbury’s would continue to support all farmers in its dairy group whether they were in a cull area or not.

Sainsbury’s to phase out out Red Tractor logo