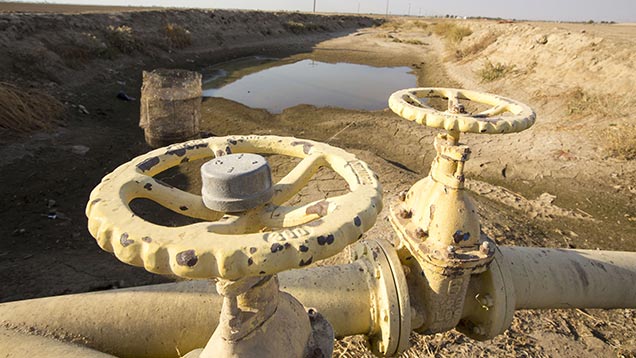 Agriculture accounts for 70% of the world’s fresh water use, yet 28% of all cropland globally is currently located in areas of high to extremely high water stress, according to the World Resource Institute.

This includes 43% of wheat, 22% of oil crops, 35% of maize and 32% of legumes. Cereal crops in the US’s grain belt, most of Spain, Italy and vast parts of China and India fall into these areas, as well as parts of eastern England and the Midlands.

Fodder crops across central and western parts of the US, southern Europe and the UK are also in high to extremely high water stress areas.

Currently, Brazil, one of Latin America’s biggest agricultural producers, is facing what is thought to be its worst drought in 80 years, with Arabica coffee beans and sugar cane production suffering.

In December Australia’s agricultural minister launched a Aus$100m (£51m) drought recovery fund for struggling farmers, saying that large parts of Queensland and some parts of New South Wales were experiencing the worst dry conditions on record.

Population growth, demands for more water intensive diets and a changing climate will all add to pressure on water resources.

California – where producers and farm businesses are suffering

California is a farming power-house. It is the most productive state in the US by value, accounting for $44.7bn (£28.8bn) in 2012 and is the fifth-largest supplier of food and agricultural commodities in the world.

But things are looking tough for the US’s most productive farmers.

The state is now in its fourth year of the worst drought in living memory. After another dry and mild winter, the Sierra Nevada snow packs, which supply the majority of the state’s water, stand at just 5% of their usual depth for this time of year.

Reservoirs, rivers and canals, which collect and channel the snow melt south through the state are drying up. Ground water reserves, which many have relied on as a back-up, are now running low from over-pumping.

Last year, the Californian Farm Bureau Federation estimated that as much as 500,000 acres of farmland was left fallow as a result of the drought and researchers at the University of California have warned this figure could climb to 1m acres this year.

The economic costs have been huge. The university estimated that in 2014 alone, the drought cost Californian farmers $1bn (£638m) in lost revenue, plus $500m (£319m) in pumping costs, and resulted in the loss of more than 17,000 seasonal and part-time jobs.

Dave Kranz of the Californian Farm Bureau Federation, says pressure from a growing state population and a national prioritisation of water towards protecting endangered fish species have contributed to the pressure on water resources.

Many farmers have had their rights to abstract water from rivers and reservoirs restricted, with some facing cuts of between 60% and 100%. Difficult decisions are being made to take land out of production, cull livestock and cut jobs.

“We’re going through a lot of angst,” says Mr Kranz. “Farmers are very creative and innovative and do understand that they are in an area where water shortages happen – but they are now taking steps that are unusual.”

Fruit and nut growers are ripping out permanent crops to focus their water on younger plants and trees, while arable farmers are reducing feed and cereal crops in favour of vegetables that have a higher return per unit of water, says Mr Kranz.

Cattle ranchers and sheep producers have been culling livestock since last year when pastures started to dry up and feed costs soared. Dairy producers with indoor production systems, or those in the south of the county where lack of rain has been the most acute, have also cut back their herds.

Fresno County – the epicentre of the drought

Fresno County, in the central San Joaquin Valley, has been particularly badly hit, accounting for about half of the state’s 500,000 acres left fallow last year.

It produces more than 400 different commercial crops and nearly half of the fruit, nuts and vegetables grown in the US, including more than 80% of the world’s almond crop and 100% of US raisins. This is enabled by a network of reservoirs and dams fed by water from nearby and northern mountain snow packs.

Now though, the drought is threatening this productivity. For the second year running, water authorities on the east and west of the county have received no water allocations from the federal government. One such authority would normally have an allocation with the equivalent of 12 inches of water on 1.8m acres. This year it has none.

Ryan Jacobsen, chief executive of the Fresno County Farm Bureau, says the drought has resulted in around half of the county’s farmers – between 2,000 and 3,000 individuals – losing their right to abstract water from waterways and reservoirs.

Strong commodity prices have helped offset some of the effects of the drought, but its cumulative impact is now growing and people are going out of business.

Last year a spot market for water emerged, but now the situation is so bad there is barely any water left to sell, says Mr Jacobson.

Many are finding the drought difficult emotionally and Fresno’s Farm Bureau has received lots of pleas for assistance, he says.

Mr Kranz warns that farmers and growers are starting to run up against the limitations of what can be done creatively.

With more mild and wet winters predicted, California urgently needs to refocus its infrastructure towards capturing rain water rather than snow melt.

“We’ll start to see the state turn brown soon if there is no rain,” says Mr Kranz. “We’re reaching that time of year now where we don’t really get rain.”

“Over the short term, the drought may not have such an impact, but all bets are off if the drought has a fifth, sixth or seventh year,” he says.

California is the “Wild West” of water, says almond grower

Matt Efird and his father Russel

Matt Efird is expecting to lose a minimum of 25% of his almond crop this year, while facing a 50% increase in costs.

He grows wine grapes, raisin grapes, walnuts and prunes across his 1,300-acre farm near Caruthers in Fresno county, but half is cropped to almonds.

“It’s scary, it’s very concerning,” he says. “We haven’t had any surface water deliveries (water abstraction quotas for non-ground water)to the ranch and we’re now in our fourth year.”

Normally he irrigates three to four months over summer, using water mainly allocated from a reservoir, but now he is irrigating year-round and has been reliant on groundwater from his wells for four years. He has just drilled one more well, with two more planned.

Reliance on groundwater is causing a build-up of salt at the tree, says Mr Efird.

“We will eventually have too much salt and we have already seen a reduction in tree health and productivity – it is the gradual, slow death of our trees,” he says.

He estimates his fertiliser costs will increase 50-100% this year to mitigate the salt.

The drought has been exacerbated by two warm and short winters, says Mr Efird, which have prevented trees entering dormancy.

Spring has been pulled forward and the farm’s operations are 10 days ahead of normal this year, while the almond crop is expected to be harvested six weeks early.

While he expects yields for almonds to be down, Mr Efird says quality is unlikely to be affected and that they have been “truly blessed” by strong commodity prices keeping the business profitable – almonds fetched about $4.10/lb (£5.74/kg) last year compared with $0.85/lb (£1.18/kg) in the mid 1990s.

Wine grape prices have not fared well, so with a need to prioritise water, Mr Efird took the decision to rip out 160 acres of vines.

He is now wondering whether to replace his permanent crops with temporary ones so he has more flexibility.

State attitudes to water do not help. “California is like the Wild West when it comes to water,” he says.

Landowners with access to groundwater can pump with little regard for their neighbour’s water availability, says Mr Efird.

If everyone is asked to make further cuts, he worries how growers with already efficient systems like him, will cope.