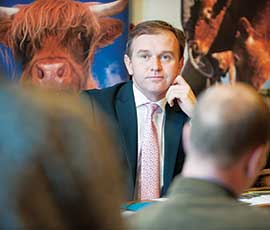 Three major charities representing six million people have called on the government to slash direct payments to farmers and use the money to fund environmental measures instead.

Members of the RSPB, National Trust and Wildlife Trusts lobbied MPs at Westminster on Wednesday (23 October). The campaign comes as DEFRA secretary Owen Paterson prepares to launch a government consultation on how best to implement CAP reform.

The charities want the government to reduce direct farm payments by 15% – the maximum available under CAP reform – and spend the cash on measures aimed at helping wildlife, landscapes and heritage features.

The NFU remains opposed to the idea. Reducing payments by 15% precisely at the time when some other EU countries are preparing to increase direct support will leave English farmers at a competitive disadvantage to their European counterparts, it warns.

“Not everyone agrees with the NFU,” said RSPB spokesman Grahame Madge. Such schemes were vital for competitiveness and long-term viability of the sector, as well as the encouraging the growth and vitality of rural communities.

Between them, the National Trust, the RSPB and the Wildlife Trusts are responsible for almost 500,000ha of land. They were joined at Westminster by 28 farmers and representatives from Conservation Grade, which accredits producers who create wildlife habitats on their land.

Devon sheep farmer Jon Andrews, who runs 300 ewes at Langdon Barton, near Plymouth, said: “Without 15% modulation, I think DEFRA would find it difficult to sustain the environmental stewardship agreements there are now, let alone bring new ones to the table.”

That view was echoed by Shropshire beef and sheep producer Jack Edge. “We’ve been in environmental stewardship almost since the beginning,” he said. “It has allowed us to take poor land out of production – without 15% modulation our farm would look very different.”

National Trust rural enterprise director Patrick Begg said: “The government needs to show real leadership in Europe and send a clear signal that environmental sustainability has to be put at the heart of farming in the UK.”