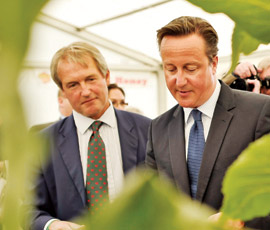 David Cameron says he will look at the cost of regulations on farming after meeting industry leaders in Devon.

The Prime Minister met local farm leaders during a visit to the North Devon Show at Umberleigh on Wednesday (7 August).

Mr Cameron said he had held good meetings with the NFU and other farming organisations.

“There are some particular points they’ve made about some of the costs being imposed through regulation on farming,” he said afterwards.

“I’m going to take those away and look at them. It has been very useful to have that conversation.”

A review of agricultural red tape was launched by DEFRA last month as part of a government drive to unlock economic growth by cutting unnecessary bureaucracy.

DEFRA is inviting views on how the government can make regulation less burdensome for businesses working in agriculture, animal health and welfare, plant health and forestry.

The Red Tape Challenge was launched in April 2011 to give the public, businesses and experts the opportunity to review and comment on government regulation.

Its main objective is to remove unnecessary or ineffective procedures and ensure that regulations are implemented as efficiently as possible.

Mr Cameron said the Conservative Party had a track record of standing up for rural areas.

“I think one of the things that is so encouraging is seeing so many young people wanting to go into farming,” he told reporters.

The government wanted to encourage the farming industry to take up apprenticeship schemes and find work for youngsters who were “so enthusiastic about this important industry”.

The DEFRA red tape theme will be open for comments until 3 September 2013. Contributions are invited via the Red Tape Challenge website.

More on Cameron’s visit to Devon