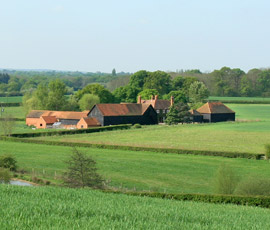 Landowners have been advised to plan carefully if they are considering selling land in the coming years, to avoid potential pitfalls created by CAP reform.

Current proposals could have a dramatic effect on land values and the transfer of single payment entitlements. These include the prohibition of multiple entitlement transfers, a requirement for 2014 claimants to have submitted a claim in 2011, the introduction of 7% ecological focus areas on arable land, and a ban on ploughing permanent pasture.

However, with careful planning, farmers could minimise the impact of those proposals, said Sarah Macdonald-Smith at Strutt & Parker. “If you have grassland which is coming up to five years old, consider cultivating it, because there is a £1,000/acre difference in value between grassland and arable land.” Under the current proposals, farmers will have to retain at least 95% of their permanent pasture based on the 2014 reference period. “You may want to keep your grassland area to a minimum during that period – and landlords should also give consideration to what their tenants are doing.”

The proposed ecological focus areas may be in addition to farmers’ obligations under agri-environment schemes, she added. “A lot of environmental schemes will be coming to an end between now and 2014. You need to give significant thought to whether or not to renew those schemes.”

In order for farmers to claim the new Basic Payment from 2014, or possibly 2015 if reform is delayed, they must have activated and claimed at least one single payment entitlement in 2011. This will prove extremely detrimental to new entrants. Although vendors can transfer their entitlements when selling land, they will only be able to do so to one purchaser, impacting on the sale of lotted land parcels.

“We have to remember that 65% of farms are still bought by farmers, so this will not be an issue for them,” said Miss Macdonald-Smith. “More often it is residential farms sales that are lotted up, and quite often those purchasers are less concerned about the single payment. However, if there is a large estate which is being sold in lots, that may become more of a problem.”

Joel Woolf, partner at solicitor Foot Anstey, said the uncertainty created by the proposals was making land transactions particularly difficult. “There are a number of cases where landowners are selling a part of the estate to a new entrant who hasn’t claimed the single payment in 2011. They will have to buy entitlements on the open market, but I can easily see them being quite expensive, especially at the start of the new CAP scheme.”

One alternative is for the new entrant to rent the land to a tenant, who has established entitlements, during the first year of the new scheme. The tenant can then activate and claim Basic Payment entitlements, which revert to the landlord at the end of the short tenancy. “There is the potential for quite a lot of land to come on to the market, which will drive rents down.”

However, the proposals would have a far smaller impact on the market than in 2004, when it looked likely that entitlements would not be transferable, said Giles Allen at Strutt & Parker.

“While food and soft commodities remain in demand, I predict that farm values will either remain at existing levels of £7,000-8,500/acre or continue to rise slowly.

“It should also be remembered that these are initial proposals only and it may be that subsequent drafts see these anomalies disappear.”