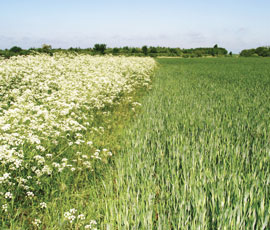 Arable farmers should resist making changes to their businesses before reform of the Common Agricultural Policy is concluded, industry experts have warned.

At Cereals, farmers were told not to over-react by adapting their businesses to proposed CAP changes, which could alter considerably before they are implemented.

During discussions about the reforms, which could be introduced in January 2015, chief DEFRA negotiator Martin Nesbitt said the government wanted to move more funding into Pillar 2 environmental and wildlife schemes.

“A lot of member states are focusing on keeping money focused on farming businesses, but we have a slightly greater focus on delivering public goods, which is not something I am going to apologise for,” he said.

“It is no secret the government is in favour of a steady transfer of funds from Pillar 1 [direct support payments] to Pillar 2.”

But the NFU said food security should be the original public good enshrined in the CAP.

“We don’t want a system that gives our government the flexibility to make a common policy even less common,” said combinable crops board chairman Andrew Watts.

“We see the ability of farmers to respond to the market being diminished by these proposals. We mustn’t end up with a system that turns the clock back.”

Richard King, Andersons’ head of business research, said it was wrong of DEFRA to put UK farming in some sort of “economic test tube” to explore what might happen across Europe in future.

“The UK should not be way out in front on these things,” he said.

But he urged producers not react too quickly. “We know we will have to react at some stage, perhaps restructuring businesses, adjusting rotations and looking at how we address ecological focus areas. We need to see what the final rules are rather than trying to anticipate them and making the wrong decisions.”

One area producers should pay attention to was ensuring the link was not broken between the SFP claimants in the reference year of 2011 and whoever claimed under the reformed CAP from 2015, he said.

“It needs to be the same entity, so be careful not to break the link by changing your business structure.”

On capping direct payments, Mr King criticised the arbitrary cut-off points being proposed by the European Commission and questioned the justification on the policy.

“It’s gesture politics, on the basis that big is bad, small is good, which doesn’t necessarily make any difference to anything. It is often those larger businesses that are doing all the right things for the environment and wildlife.”

But Mr Nesbitt said capping was likely, given the European Parliament was an equal partner in negotiations and had long been in favour of limiting payments in the past.

As to the greening of Pillar 1 payments and the threat to the future of existing schemes, producers were encouraged to enter current schemes if they were right for their businesses now, since they would be most of the way through such agreements before any new policies were implemented.

Furthermore, Mr Nesbitt said that DEFRA would allow producers to walk away from such commitments if CAP reforms meant producers would be disadvantaged.

He also suggested an intermediate environmental scheme could be introduced under Pillar 2 to bridge the gap between Entry Level Stewardship elements absorbed into greening and any on-going Higher Level Stewardship schemes.

On land swaps to meet environmental focus areas, seen as a way of legitimising future support payments with the public, it was noted that the Commission was now talking about rules to prevent it happening.

Such rules raised the nightmare of farming businesses being caught out when they were trying to reorganise operations for legitimate reasons, Mr Nesbitt said.

Hampshire farmer Andrew Hughes was even more pragmatic. “Moving wildlife management to Devon, because I’m farming for food, fills me with horror. It is certainly not what we should be doing.”

He said existing schemes could deliver huge wildlife benefits, if they were approached with enthusiasm.