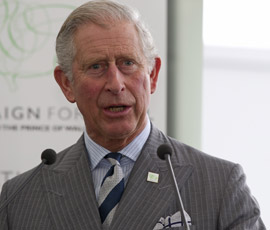 An “aggressive” quest by multinational companies for cheaper food and bigger profits is driving farmers out of business, Prince Charles has warned.

The Prince of Wales made the comments during a symposium on regional food production at Baden-Wurtemberg, Germany. Farmers were being forced to accept low prices that threatened to destroy agriculture, he said.

“The aggressive search for cheaper food has been described as a ‘drive to the bottom’, which I am afraid is taking the farmers with it. They are being driven into the ground by the prices they are forced to expect for their produce and this has led to some very worrying shortcuts.”

“The recent horsemeat scandals are surely just one example, revealing a disturbing situation where even the biggest retailers seem not to know where their supplies are coming from. It has also led to a very destructive effect on farming. We are losing farmers fast.”

Young people do not want to go into such an unrewarding profession, said the prince. To try to alleviate the problem, he had recently set up a number of apprenticeship schemes. But the fact remains that the average age of British farmers is 58 and rising.

Consequences of the quest for cheap food included the deteriorating state of public health, type 2 diabetes and other obesity-related conditions. “The public bill for dealing with these is already massive and I am told it could become completely unaffordable if we do not see a shift in emphasis.”

It was wrong that farmers who farmed sustainably – in environmental ways that reduced pollution and contamination – were then penalised, the prince suggested. He said: “They find that their produce is considered too expensive and too ‘niche market’ to be available to everyone.”

Yet cheap food was not cheap at all. “In fact, it is very expensive. The only reason it appears cheap in the shops is because the costs either fall somewhere else, or they are being stored up for the future.”