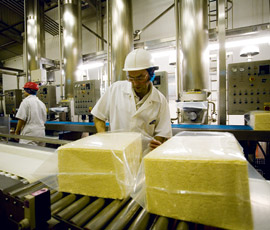 In the past week, two major companies announced price rises that will kick in next month.

Evidence suggested there was less cheese being made, following a move by processors to divert milk for cheese into other products earlier in the year. This could lead to a shortage through the back end of the year, with prices paid to farmers nudging towards the 34p/litre mark, he added.

“The global perspective, inclusive of the EU, is that demand [for cheese] should remain ahead of supply,” said Mr Jamieson.

“Our plea to retailers and the food service sector is that cheese is a long-term investment, so they have to encourage the processors and farmers to put milk into cheese.”

Both First Milk and Dairy Crest have announced plans to up the price paid to farmers on cheese contracts.

Dairy Crest’s 400 producers on Davidstow contracts will receive a 1p/litre price increase on 15 July, bringing the standard litre price up to 32.25p.

In addition, the company has enhanced its volume incentive scheme – farmers will no longer need to exceed a threshold of 3.5% and will now be rewarded for producing at least 2% more milk than the 2012-13 year.

The new scheme, backdated to 1 April, will run until 31 March 2014 and pay producers a 2p/litre bonus on every litre supplied above last year, as long as a 2% trigger is exceeded. The payments will be made quarterly in arrears and are not available to farmers under notice.

First Milk’s cheese producers will get a 1.1p/litre price rise in two phases across July and August, bringing the manufacturing pool standard litre price up to 30p.

An initial increase of 0.6p/litre will be implemented on 1 July, with a further 0.5p/litre applied on 1 August. The farmer-owned co-operative has approximately 1,800 suppliers, with about 35-40% of the 1.45bn litres of milk procured a year processed into cheese.

Consumption of flavoured milk is set to overtake white milk globally between 2012 and 2015.

According to research by food processing and packaging company Tetra Pak, flavoured milk consumption is set to increase by 4.1% from 17bn litres to 19.2bn litres by 2015. This compares to a forecast 1.3% growth in carbonated soft drinks consumption.