Next month’s Agritechnica show will see the unveiling of Claas’s mid-hp Arion tractors, which replace the Ares series.

Two ranges are on offer, the 105-155hp 4-cylinder 500 series with eight models and the 115-175hp 6-cylinder 600 range with 11 models. There are three spec levels – Cebis, CIS and C ranges – aimed at everyone from tech-hungry arable farmers to those looking for something straightforward.

There is a new cab interior, an enlarged fuel tank and redesigned back-end to bring the Arion in line with its larger stablemates. 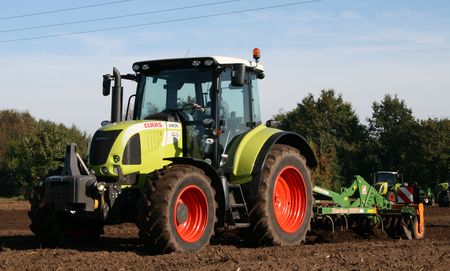 The top-spec Cebis versions also incorporate full Hexactiv auto-shift transmission, whereby all 24 speeds can be set to change on engine load and speed and throttle position.

The Arion 540 and 640 models are also equipped with Claas’s Power Management System, giving an extra 20hp in ranges C and D (or in ranges A and B when the pto or hydraulics are being used). A 50k box is available throughout the range apart from the 510 and C specifications. 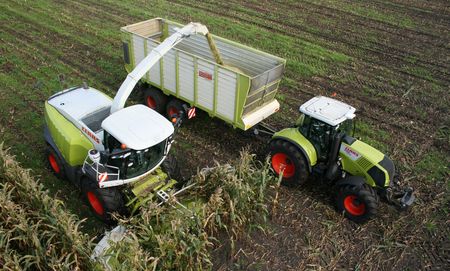 Claas has found a new way of giving high power outputs as well as flexibility, and that is by fitting twin engines on its latest 900 range of self-propelled foragers.

The top-of-the-range Jaguar 980 has twin 415hp Mercedes engines giving 830hp in total and the slightly smaller Jaguar 970 has two 365hp power units giving 730hp. The operator can work with just one engine or both according to working conditions.

Both these two flagship models and the smaller 950 and 960 models have new curvy exteriors that disguise more fundamental changes, like the altered axle positions that shift weight distribution and, says Claas, make it the lightest machine in its class.

A new feed roller design means there is 28% more throughput than previous Jaguar models and to cope with this, each is fitted with the latest Claas V-Max chopping cylinder.