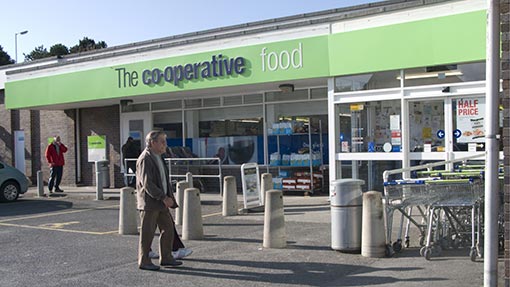 The Co-op has joined Tesco and Morrisons in announcing a price-cutting plan on hundreds of food products.

The supermarket will start by lowering the cost of staples like bread, milk, eggs, chicken, bacon and bananas as part of its Fair & Square prices commitment.

But it said the £100m investment will not affect farmers or producers.

Last week the Co-operative Group announced a £2.5bn loss and a £35m deficit in its food business – the worst results in the company’s 150-year history.

And the UK’s fifth biggest grocer faces fierce competition for market share after Tesco and Morrisons said they would carry on slashing prices in the wake of falling profits.

In March’s supermarket milk-price war, the Co-op cut the cost of one- and two-pint bottles to 45p and 85p respectively, after Tesco and Sainsbury’s pulled their four-pint price down to £1.

The NFU said it had been assured by the supermarkets there would be no pressure on prices paid to farmers, but was monitoring the situation.

“We do not want them to devalue British produce, but [NFU officials] have all been told the supermarkets are taking the hits on their bottom lines,” a spokesman said.

“It is nothing new. Supermarkets get into price wars. But they are taking the hit and we are assured farmers are not affected.”

Morrisons announced in March it was investing £1bn over three years to cut prices and boost its own-brand range, to counter the rise of discounters Aldi and Lidl.

In February Tesco said it was investing £200m to lower prices and last week chief executive Philip Clarke said that was just the start.

The Co-op has said it wants to be Britain’s best community retailer and will be opening more than 100 stores this year to add to its 2,800 across the country.

In March 2013 it announced a five-year plan to revitalise sales by cutting prices, offering discounts to high spenders and refurbishing three-quarters of its stores by the end of 2014.

The Co-operative Group is also preparing to sell off its multimillion-pound farm business that manages more than 19,830ha (49,000 acres) across the UK.