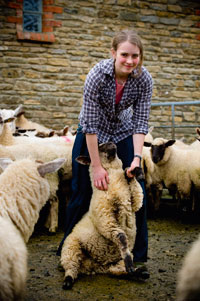 “Why am I doing this?” That’s what goes through your head when you’re halfway up a Lake District fell helping to gather sheep. That’s what you ask yourself when you just have to stop and enjoy a second of relief for your oxygen-starved limbs before forcing yourself into a run to catch up with the others.

Your head pounds and your legs scream and you think of all those nice, relatively flat fields back home and never want to see so much as a hill again. And still the dogs go haring around, adding miles to their journey as they run ahead and then back to their masters like live yo-yos.

But you don’t want to get left behind, slow things down, or (heaven forbid) be responsible for losing sheep, and these worries overtake any other need and you find yourself actually running… sometimes.

There were five farmers on the day I joined a gathering in Wasdale, and there must have been about 15 dogs between them. A huge area was covered in a co-ordinated wave driving the sheep towards the boundary of a brook, before they were taken down to the road. People have probably gathered sheep using the same routes for hundreds of years.

We’re talking miles of rough open fell, steep drops, bracken, brooks, boggy patches and rain-soaked moss that fill your boots with peaty water. In some places, you could have sheep 40ft away and, if you were on your own, you might miss them among all the rocks and swells of the fell. Where the sheep were difficult to get to or could have taken off in the wrong direction, the dogs proved their worth a hundredfold.

This is a different sort of shepherding from what I’m used to. The farmers are exceptionally hard working, regularly requiring the most incredible fitness and stamina. The gatherings are very sociable and good humoured and I felt privileged to have been part of something that very few get to experience.

Sitting by Wastwater (the deepest lake in England) after the sheep gathering that day, we were offered as much food and drink as we could eat and I learned all sorts of things, like the story that there’s a gnome garden constructed somewhere on the lake bed. Now I bet you didn’t know that.

Sorting out the sheep is based on tags and markings individual to particular farms. The ewes then need shearing before being returned to the fells. I was pleased to find shearing technique isn’t easily forgotten – it’s a process you have to physically learn, like learning to ride a bike. There are so many subtle changes of balance or use of the hands, feet and knees that you can only learn by repetition and trial and error.

David was the first person to ever let me have a go at shearing, so it felt good returning to his farm after having had a bit more experience. It went well, though I was very much slower than he was. Thankfully, there wasn’t a direct comparison of time as there was the one handset and we took it in turns to shear and fleece wrap.

Back in Yorkshire, life has been just as varied as normal. Highlights include helping a friend with duck plucking a couple of times (I now know what a duck’s “quack” looks like) and I’ve finally seen a sheep shower in action (the name is fairly self-explanatory as it’s an alternative to sheep dipping or using a pour-on chemical). I have a feeling the pour-on product I’ve used is more efficient in application times and durability, but the showered sheep look fresher for having been treated.

At first, a taste of upland farming felt very alien to what I’m used to, but I’ve decided I love it and am looking forward to next year when, all being well, I’m going to celebrate finishing college by going fell gathering and shearing again. Once more, farming in yet another of its guises has caught me hook, line and sinker.

Lizzie Jennings, 21, has just finished the second year of a two-year foundation degree course in Agriculture at Bishop Burton College in Yorkshire