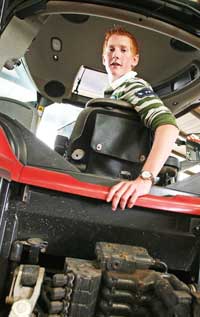 Steve Mears, 18, has just completed the first year of a four-year degree in Agriculture with Mechanisation at Harper Adams in Shropshire

Ready to cut, yet still not quite dry enough. These few words can sum up the last few weeks and it’s a similar story, I would imagine, for many farmers this summer.Hopefully as you’re reading this, the poor weather will have moved on and the promised heatwave summer will have materialised.

Despite the unsettled weather, harvest here in Malvern has been progressing at a steady pace with oilseed rape, peas and oats all safely cut and stored in the barn. The oats were harvested at around 13% moisture and did not require drying. The same cannot be said for the oilseed rape and peas, which required a pass through the drier prior to storing.

Several lorry loads of rape and oats have already left the farm and we have since moved on to combining wheat. Cutting has progressed when the weather has allowed and the grain stores are beginning to fill up with milling and feed varieties. I am told yields are down on previous years – a result of the drought-like conditions in the run up to harvest.

Alongside combining, cultivations and groundwork have begun ahead of next year’s cropping. Similar to many farms, a minimum tillage system is practised here and I have been busy working down oilseed rape stubbles with a Simba DTX. Mounted on the back of a large John Deere, the unit is made up of subsoiling tines, two sets of angled discs and a packer roller.

The outfit appears to do a very good job at incorporating trash and developing a seed-bed, ahead of the drill. Although it did mean a trip around the tramlines with a topper ahead of the cultivator, as fallen rape stems have a tendency to bulldoze up in front of the tines.With some long hours on a tractor already under my belt and many more to come, I have taken a liking to the comfortable cab, particularly the air suspended seat, and have almost got my head around the vast array of buttons and the functions that they control.

As any student will know, the most important buttons are of course associated with the radio. BBC Radio 1 has again provided plenty of entertaining listening and it has been common to hear shout-outs and requests from students and staff involved with harvest across the UK.

My summer hasn’t all been about working though. I was fortunate to have a day off to visit the CLA Game Fair at Ragley Hall in Warwickshire. I’m used to visiting smaller local game fairs, so I was amazed at the sheer size of the event.

I spent a large amount of my day wandering up and down Gunmakers Row browsing many of the guns on offer. But as nice as they were, I couldn’t see how my student loan would stretch to the five-figure price tags attached to many of them – particularly the ones on the Holland and Holland stand.Results for the summer exams were also published recently and it was certainly a relief to hear that I had passed all my modules. Having spoken to friends and course mates since, it appears that most people passed, with only one or two having the odd re-sit to contend with.

With results out of the way, harvest in full swing, cultivations under way and seed hay ready to cut any day now, it looks set to be a busy few weeks. Let’s hope the weather comes right at one of the most enjoyable and important times of the year.