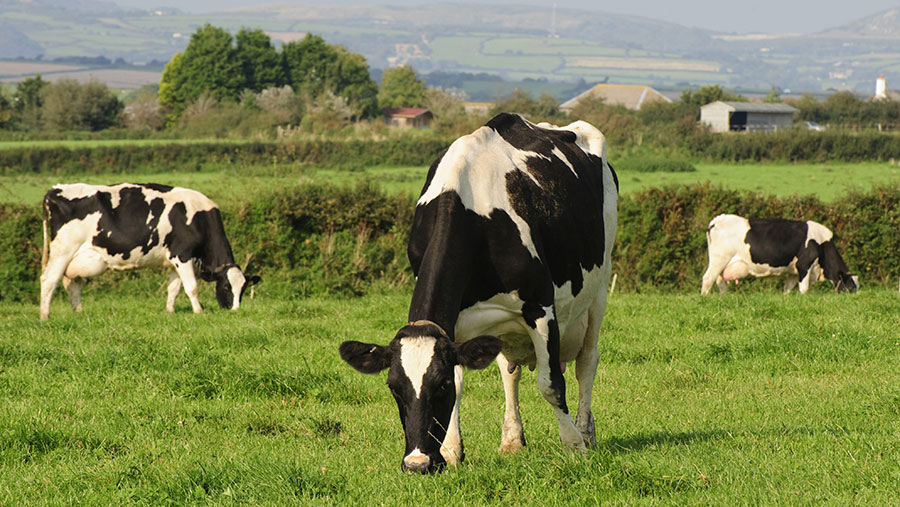 In the three years since March 2014, the number of herds in the South West deemed by AHDB as being “long-term sustainable” has fallen from 82% to just 17% by March 2017, according to a joint study by Savills and the Duchy College Rural Business School.

Correlating with low milk prices, the number identified as “short-term sustainable” increased dramatically from April 2015, following a year of declining milk prices in which the UK farmgate average fell by a quarter.

When the average UK price declined to below 20p/litre in June 2016, vulnerable herds increased by 136%, as sustainable herds fell to less than 20%.

AHDB statistics show despite milk prices recovering by 38% in the nine months to March 2017, the number of long-term sustainable farms in the region barely improved.

Despite the general impression that increased herd size results in greater FBIs, the figures proved improved performance through best practice could raise the FBIs for a large proportion of dairy herds.

A third of farms had higher total private drawings across the four-year period than their cumulative FBIs – and this was even higher on farms with younger working partners.

The analysis proved those farms that had the highest FBIs and most cash on average were mainly tenanted farms, which were larger, with more cows and higher yields.

These farms invested the same amount in machinery and equipment as mixed tenure farms.

The study added the fewer opportunities to diversify in the tenanted sector allowed these farms to focus more on management and investment within the core dairy business, as a consequence improving long-term sustainability.

This contrasted with mainly owner-occupied businesses which tended to focus on building a capital base.

The analysis warned that servicing this additional debt shouldn’t undermine the core business.

The analysis found 16% of farms within the sample invested in land within each of the six years, with two-thirds spending on buildings and 60% making machinery reinvestments greater than depreciation.

The reasons for the other 40% not reinvesting were likely to be a mix of the following:

The study used the example of amalgamating smaller herds in a locality to create larger milking herds in one place.

This increase in economies of scale could allow for longer term investments in buildings, machinery and technology.

The right agreements facilitated the efficient use of resources, labour, land, capital and skills according to the analysis.

Any joint venture should be thoroughly researched and costed to negate serious adverse financial effects on the core dairy business, warned the study.