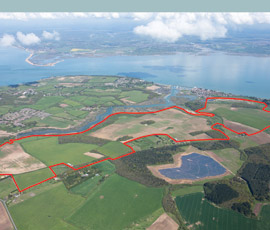 About 900 acres of commercial arable land overlooking Yarmouth on the Isle of Wight is the first such sale for at least 10 years on the island. It is also the first farm to be offered there for more than a year.

One of the biggest blocks of land to come on the open market this year, it is part of a larger land holding. The land at Thorley Farm is in an organic wheat/beans/grass rotation, bringing in payments from the Organic Higher Level Scheme until 2017.

A buyer could continue with the scheme or take an option to come out of it this year. Alternatively, the current owner would be prepared to keep farming the land under contract, said George Syrett of Savills, Winchester.

Two farm buildings at separate locations provide 400t of grain storage and a five-bay machinery store while a family shoot generates letting income by a few days each season.

Anyone on the Isle of Wight for a viewing could also take a look at Span Farm in the Rew Valley – a stock farm with far-reaching views across the island, which includes four holiday cottages and an old barn with planning permission to use as a conference hall or events venue.