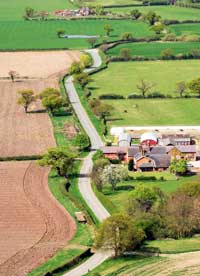 One year ago, the collapse of Lehman Brothers ended the era of easy credit. One year on, some farmers have found an innovative source of capital – with growing success.

Rather than pursuing grants or commercial loans they are encouraging local communities to invest in their businesses directly. The sums involved are not small, ranging from £10,000 to more than £1m.

Such Community Investment Schemes may sound unconventional, but can offer a structured way for communities to invest in farms through shares or bonds, according to Jim Brown, lead consultant to the government’s Community Shares programme.

CISs have government backing, a clear legal framework and a good track-record, with interest rising from four new schemes per year over the past decade, to 15 so far this year and 23 further expressions of interest.

Encouraging people to become investors, members or part-owners is a powerful way of stimulating local interest and support for a farm, Mr Brown says. Indeed, the CIS approach stems from the rise of community supported agriculture, in which local populations buy produce, volunteer their time and get involved in farms more directly.

Farmers planning a CIS need to build a common vision and good relationships with stakeholders. That usually includes shared control of the enterprise. As one CIS-backed farm puts it: “One farmer, 8000 landlords.” If that sends a chill down your spine, CIS is not for you.

If it still appeals, there is good news on the legal front. Most CISs function as Industrial and Provident Societies (IPS), either as a co-operative or community benefit society. Equity is usually withdrawable share capital, with investors becoming members of the enterprise, each with one vote, regardless of how much they invest.

Shares receive an annual interest payment drawn from the profits of the enterprise. In some cases interest is paid in kind – one dairy herd finance scheme pays an 8% return per annum in cheese valued at £10/kg.

IPSs are registered by the FSA, but the Financial Services and Markets Act exempts IPSs issuing withdrawable share capital from costly regulation, which would otherwise make the cost of raising amounts under £1m prohibitively expensive.

But what about capital withdrawal? Scheme rules allow members to withdraw share capital at any time, subject to conditions laid down by the enterprise. In practical terms, there could be a notice period of anything from a month to a year. In reality, members rarely withdraw funds, since a long-term interest in the business is the prime motivator for getting involved, rather than investment return alone.

“As a means of raising capital and community buy-in, CISs offer a lot,” Mr Brown says. “In these days of tight farm finances they are an option many more farms could consider.

“Member-investors usually become the most loyal customers and supporters of the farm, an important factor in building strong local links with the community.”

CISs could even help to resolve the succession crisis looming over many farms. “They could enable farms to remain in local ownership and free future generations of young farmers from the burdens of taking on massive debts to finance their businesses,” Mr Brown says.

Fordhall Community Land Initiative, near Market Drayton, Shropshire, used a CIS to raise £750,000, from 8000 people across the UK and abroad, to purchase the freehold of a tenanted organic farm threatened by developers.

Tablehurst and Plaw Hatch Farm, East Sussex, used the CIS approach to raise over £215,000 through 1100 investors to purchase the farming operations on a 700 acre tenanted farm. Shares cost £100 each, are not tradeable and do not yield dividends or benefits, but members draw a sense of participation in a worthwhile enterprise, in which they have voting rights.

Adam Twine, a mixed farmer in Wiltshire, wanted wind turbines on his farm but the community was hostile. By creating a CIS, offering residents the chance to buy into the success and management of the scheme, the project won community support . Westmill Wind Farm Co-operative is now fully community-owned, with £4.5m raised through 2374 shareholders, plus a bank loan. www.westmill.coop