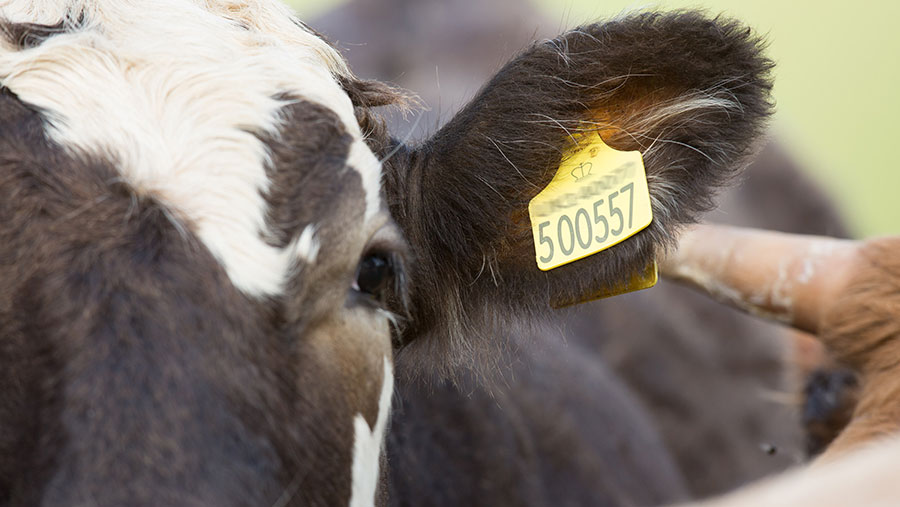 Plans to require all cattle keepers in Scotland to tag cattle with EID tags are to be announced at the Highland Show next week.

The current timeline will mean all newborn calves will have to be EID tagged by 1 January 2020, with discussions continuing about how to roll them out to the rest of the national herd.

It is likely that all cattle leaving a holding will need EID tags by 1 June 2022 – meaning youngstock will already have them by this stage and only adults will require retagging.

See also: How a large Luing beef herd is managed on the Scottish isles

The change, which is still subject to the passage of legislation in Holyrood, will play a big part in making paper records for cattle a thing of the past, says ScotEID director Bob Yuill.

“Retagging will be kept to an absolute minimum,” he promised, but said that farmers need to recognise that there is a cost – both financial and administrative – to running the old and new system in parallel for longer than necessary.

Tag manufacturers price a pair of cattle EID tags at about £2 more than conventional tags, but costs will be kept down by the EID number being the same as the visible number, meaning there will be no obligation on farmers to purchase EID readers if they do not want to.

But Mr Yuill said there will be significant benefits from embracing the benefits EID tags have to offer. These include reduced workloads during TB testing, with cattle able to be identified electronically rather than the dangerous work of scraping dirt off tags on cattle that are stressed and aggressive.

It will also mean an end to animals having to be destroyed at abattoirs rather than enter the food chain if they arrive for slaughter with the wrong paper passport, and it is likely to be simpler to move cattle between farms with the same holding number.

All EU member states were ordered in June 2014 to start preparing their cattle traceability systems for compatibility with EID technology, with a deadline for compliance set by the end of 2019.

Scotland is significantly further ahead of England and Wales, as they are close to completing the backend software required to manage an EID-based movement service.

In contrast, work at Defra on the Livestock Information Program – the replacement for CTS Online – has not even begun, with pre-consultation discussions still taking place, according to NFU chief livestock adviser John Royle.

The proposed multispecies database would allow real-time movement recording of all livestock and bring about huge savings for farmers, markets and abattoirs by eliminating paper records and reducing the number of on-farm inspections, he says.

But despite the relatively short time left to deliver a large IT project, he is bullish about the prospects of the system being ready in time, saying there are comparable systems in other industries that deliver traceability of goods that can hopefully be adapted.

Scottish farmers wishing to learn more about the changes can visit the ScotEID stand at the Highland Show on Avenue 7 between NFU Scotland and the SRUC.
See more
Share this
Advertisements