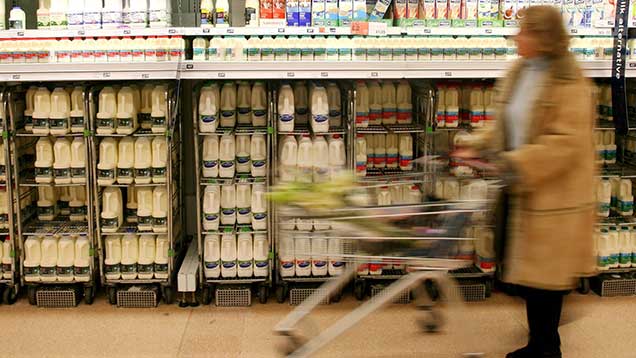 Consumers would be willing to help struggling dairy farmers and pay more for their milk, according to a new study.

A survey of 1,270 milk drinkers by market research organisation Mintel found 51% of those would be prepared to pay more than £1 for a four-pint carton of milk.

On average, most of those surveyed would be willing to pay £1.28 for a carton of this size, which usually retails in supermarkets at between 89p and £1.

However, despite a fall in value sales, volume sales of milk are expected to have stagnated at 5.11bn litres between 2013 and 2014, said Mintel.

“Value has been torn out of the UK milk market in recent years as a result of the grocery retailer price wars but products such as fortified milk and milk from grass-fed cows could help operators build value back into the market,” said Richard Ford, senior food analyst at Mintel.

“There is scope for operators to move away from the relentless price cuts in the milk industry without alienating shoppers.”

Mintel’s research also shows that despite a fall in value sales of milk, there are pockets of strong growth.

Responding to the survey results, NFU dairy board chairman Rob Harrison said: “It’s heartening that the British public is willing to pay more for liquid milk at a time when farmgate milk prices are, for the majority of British dairy farmers, under the cost of production.

“Thankfully, a few retailers [Tesco, Sainsbury’s, Marks and Spencer, Waitrose and The Co-operative] have put in place mechanisms to better support farmers supplying them with liquid milk – in the short-term these farmers aren’t impacted by the recent retailer price wars.

“We need more retailers to put in place support mechanisms on liquid milk, but also on other dairy products. It is important that processors and retailers give farmers a sustainable and fair price for milk.”

The discounting of liquid milk was harmful to the whole industry as it removed value from an already highly competitive market, he added.