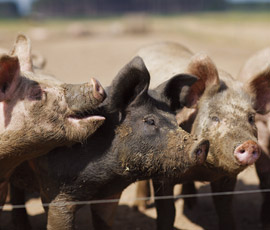 Major changes to the pig pricing system are happening just as the industry is returning to profitability.

This follows announcements last Friday (23 August) that both Woodheads and Cranswick have decided to stop publishing weekly pig contract prices.

The majority of UK pigs are sold on a contracted basis with a much smaller number being traded on the spot market.

Although contract pig pricing arrangements may vary and were often previously tied to the Deadweight Adjusted Pig Price (DAPP), in 2009 Tulip, the largest pig processor in the country, introduced weekly announced contract prices that were known as “shout prices”.

Tulip’s move was followed by Cranswick, Woodheads, Gills and Karro (formerly Grampian and then Vion) and was seen as a way in which weekly contract prices could reflect weekly price movements. They also provided processors with a more flexible pricing system tied to their anticipation of future pigmeat values rather than being calculated against the DAPP.

It is estimated that about 25% of UK finished pigs traded are bought on the shout price system. At the time of its introduction in 2009, the Tulip shout price was 149p/kg deadweight and the DAPP was 149.66p/kg.

Since then however, producers and marketing groups have complained that the shout price system has become more detached from spot prices and that the DAPP no longer accurately reflects market trends.

The DAPP of 167.86p for the week ended 17 August compares with the Tulip shout price of 163p/kg for the same week.

Because of a shortfall in European mainland pigmeat supplies, UK pig processors will be looking for larger volumes to make up the deficit and something of a sellers’ market is emerging.

A combination of supply chain shortages and the unpopularity of the shout price system has encouraged producers to serve notice on existing shout price contracts. Woodheads and Cranswick are already looking at more transparent pricing methods (see p17). Many of these could be based on a pricing matrix that could include elements of the DAPP, spot prices, a recalculated weekly price and in some cases a cost of production (COP) element too.

Although the National Pig Association (NPA) has welcomed the move away from weekly prices, it has also advised against the widespread use of DAPP-only price contracts. This is because the DAPP is in effect a self-feeding mechanism that may be too slow to react to market conditions.

The average weekly shout price for the three remaining weekly price abattoirs this week is 163.67/kg. This compares with the DAPP, which stands at 167.72p/kg while spot bacon pigs are trading in the 173p/kg region.

At the same time the British Pig Executive (BPEX) is forecasting reductions in the supply chain with European mainland pigmeat production facing a shortfall in the final quarter of this year.

Based on data provided by the EU statistics organisation Eurostat, the number of pigs slaughtered in the October to December period could fall by 6%.

UK clean pig slaughterings were however 0.7% higher in July 2013 than in the same month the previous year and pigmeat production increased by 1.6% over the same period.

Reports of dwindling European pigmeat supplies are also underlined by further sharp rises in UK cull sow values and export abattoirs are now bidding in the 130p/kg region compared with 115p/kg this time a year ago.

Pig prices could plateau due to import threat