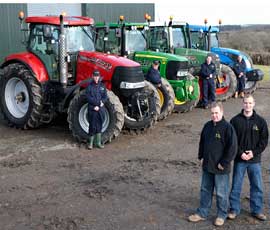 A Devon contractor has decided to run four different makes of tractor to assess reliability, performance, dealer back-up and fuel use. Emily Padfield visits him to see why

Anyone considering their next tractor purchase faces a tough decision. Mouth-wateringly glossy brochures boasting of increased performance, reduced fuel use and superior operator comfort mean it’s almost as hard as finding a potential wife. After all, you’re probably going to spend more time with it.

So, with all manufacturers promising the same things, how are you supposed to decide? Devon contractor Luke Furse has taken what may seem a drastic approach – buying four tractors, each from a different manufacturer, to establish which offers the most comprehensive back-up, the lowest fuel use and running costs and the best reliability. All for three years. 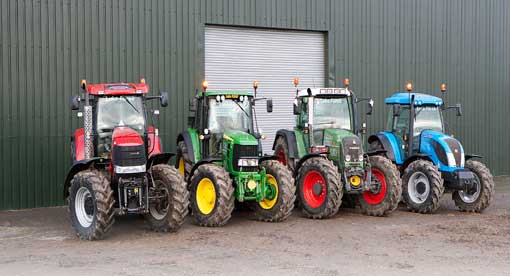 It may sound drastic, but for a business that runs a fleet of 15 tractors and carries out thousands of acres of grass and maize silaging as well as stubble-to-stubble contracting, Luke and his son Lloyd are determined to establish who, or what combination, offers the best package for their business.

Luke started the earthmoving side of the business in 1978 with a County 1004, hauling soil from a local village, after which he expanded the business to offer excavating and other heavy machinery work. He branched out into agriculture in 1989, an area of the business Lloyd is now running.

“We’re doing a lot more arable work now and so are looking towards having larger tractors to cover the extra acres,” explains Lloyd. “We’ve a 650hp forager in the field, a JCB 414 at the clamp and need to be looking at 200hp-plus to pull a silage trailer.”

“Historically, we’ve always tried to keep the mainline tractors one colour,” says Lloyd. “In the very beginning we were all County, after that we ran a fleet of Fords up to the 7810, then New Holland.”

In 2001, the fleet changed to Valtra, or Valmet as they were known at the time. “Our 10 Series tractors were running every day without any problems but we had reliability problems with the 7840 range which, in the end, put us off New Holland.”

The fleet then took on another colour after the local dealer ceased selling Valtras. “We had a John Deere 6620 which we were pleased with and from 2004 we gradually replaced the Valtras.” They stuck with green until summer 2010 with the exception of a Fendt 718, bought in 2008. “Although it was a lot more money, it’s given us no trouble whatsoever.”

The company’s front line tractor, a Deere 7830, did 1347 hours in the first season. “We took it out of the shed in the spring and on the second day the driver rang up to say the engine had seized.” It turned out that the number six piston had melted and the engine needed a substantial rebuild. “The back-up was 150%, we couldn’t fault it, but by this time we had lost confidence and replaced it with a Case IH Puma 210 CVX.”

This, added to the EGR unit on the 6930 playing up, caused Lloyd to start looking for alternatives for the fleet.

“With modern technology, things are rapidly moving on and no matter how many reports from other contractors and users you listen too, the only way to find out which tractor suits your business is to try different makes.”

So, in mid-2010, the Furses decided to conduct a three-year test on four tractors to see, ultimately, which offered the lowest running costs.

“We told dealers that we would be recording what problems each tractor had, what the level of service was, each tractor’s fuel use and overall driver opinion. There’s no doubt that this may have had an effect on what dealers offered us – but that wasn’t the intention.”

A new Fendt 718 was bought to replace the previous two-year-old 718, but this time on 42in back wheels.

“We also wanted to look at a cheaper range of tractors, as there are always tasks and duties that you don’t need sophistication for, like rowing up, slurry stirring and running corn from a combine.”

After looking at several of the cheaper manufacturers, Lloyd decided that the Landini offered best value for money.

An area the Furses were particularly interested in was that of extended warranties. “We wanted some level of manufacturer confidence. With all the changes that are going on with Stage 3B engine legislation, there’s no doubt that it has caused problems in terms of reliability. It’s about time the manufactures stand by their products, and for more than a year.

After tackling dealers to see what they could offer, each tractor came with some level of extended warranty. “The Landini came with a two-year warranty as standard so we didn’t ask any more. It’s got an Iveco engine, a good strong back-end, a nice cab and comes standard on Michelin tyres, one of the most expensive tyres in the book. It’s fitted with a Dromone pick-up hitch, and a full pack of weights. All the things you would pay extra for, it had standard.”

So far, the Landini has proved itself worthy of the challenge and the LandPower 135 has done 700hrs. “The Landini was a real talking point to begin with but everyone has been surprised.”

The Fendt has a three-year warranty and has performed well since its June delivery. The Case Puma 210 CVX came in July and has a 3700hr warranty with no time limit. “This tractor was given to our main tractor driver, and in the first 10 weeks it racked up 1150 hours drilling wheat.”

All four tractors have different drivers. Feedback so far from CVX driver, Mike Greenaway, is that the cab suspension is amazing, the visibility good and the tractor has plenty of power. Fitted with front linkage and PTO, Mr Greenaway prefers it to the 7830 it replaces.

The fourth and final tractor in the comparison is a John Deere 6930, ordered at the same time as the rest and delivered in December 2010. It’s fitted with front linkage and PTO and has done 300hrs. The 6930 was supplied with a five-year or 5000hr warranty. “There’s no doubt that this was because of the circumstances,” adds Lloyd. “It has always been a good tractor, but it’s nice to know the manufacturer is willing to back that.

“Although we weren’t recording exact levels of fuel use before the test, we had an idea of what we were using and the 30 Series seemed to be fairly thirsty. The plan is to monitor fuel use via a meter on the tank for specific jobs like mowing, slurry spreading and haulage and we’ve had interesting results so far between the 6930 and the 718.”

Running the same Richard Western muck spreaders for the same amount of time, the Fendt used far less fuel. “This is for six hours work, so it will be interesting to see what happens in the season.”

Interestingly, all the tractors apart from the Fendt have had a visit. “It goes without saying that both dealers and manufacturers are obviously all the more vigilant knowing that the results of the three-year review will influence our future buying patterns, so they’re more likely to ensure their machines perform well.”

“In fact, we’ve just had another 718 delivered for the fleet, and we have another CVX on order too,” says Luke.

• Farmers Weekly will be returning to Luke Furse Contractors each year to see how each tractor is performing. In the meantime, if you have any comments about the test, why not have your say on our forums at www.fwi.co.uk/lukefursetest