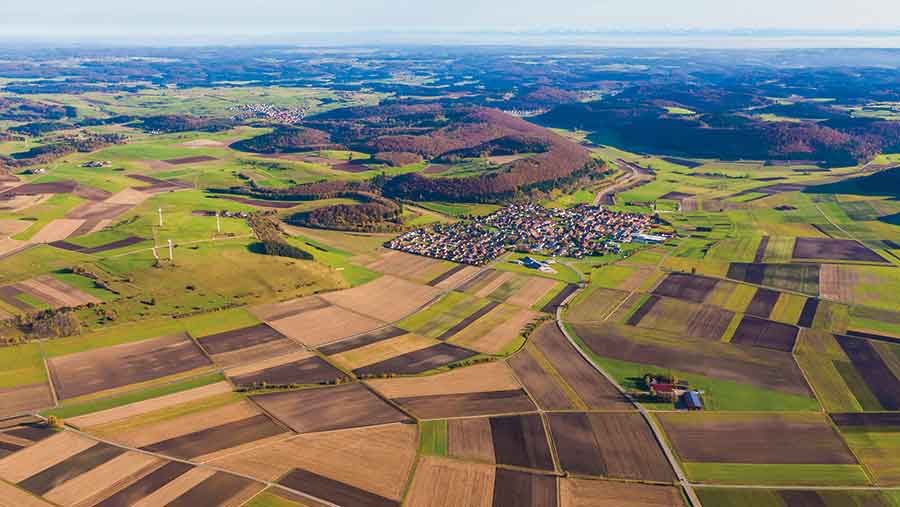 Germany is Europe’s largest pork and milk producer and the second-largest beef and veal producer.

Its farmers grew more than 47m tonnes of grain in 2015, and with about half the country’s land under agricultural production, farming’s contribution to the economy is about €46bn (£38bn) a year.

It is also the third-largest exporter of food and agricultural products in the world, with the value of exports from the sector reaching €65.4bn  (£55bn) in 2015, according to the German government. In contrast, UK food and drink exports totalled £18bn in 2015.

But while the headline figures suggest there are reasons to be cheerful, German farmers have come under the same price pressures seen across the whole of Europe.

Pig numbers are at their lowest for five years, dairy exports were down by more than 10% last year and retailers have applied significant downward pressure on prices.

See also: Farmland worldwide – what’s up, what’s down and why

According to figures from the German farmers’ association Deutscher Bauernverband (DBV), dairy farmers earned only half as much in 2015 as the previous year, while meat, grain and vegetable producers saw their incomes fall by about 25%.

And it’s not just a short-term problem. European Commission figures show Germany’s real agricultural income per worker has dropped by a hefty 28% over the past five years.

Joachim Rukwied, DBV president, says the situation for many farmers in the country is “drastic”.

“The drop in income is reminiscent of the crisis year in 2008 and 2009,” he says. “German farmers have lost 35% of their incomes in the past year and we fear there could be a decline this year of another 35%.

“Unless we see policies introduced to help farmers, we are facing a massive structural break in the industry.”

The situation has led to a considerable amount of consolidation in farming. Over the past decade, the number of farms has fallen by about one-quarter to 285,000, while average farm size has increased to 58.6ha (145 acres).

Of those who remained in the industry, many have turned to alternative income streams in an effort to bolster their profits.

According to EU data, almost one-third of farmers (92,000) have diversified – one of the highest percentages across the Continent.

More than 40% of those are producing renewable energy, a move that has reshaped crop production and changed the way the country generates its power.

Other popular alternative income streams include forests and contract work (which each account for 25% of diversified businesses), on-farm processing and tourism.

Organic more profitable, but not yet sustainable

Meanwhile, other farmers have chosen to find ways to add value to their produce to boost incomes, with organic conversion being one popular approach.

According to EU figures, Germany is home to one of the highest number of organic farms in Europe, with 5% of the country’s agricultural land – 852,670ha – farmed organically.

“Organic is a growing market here,” says dairy farmer Markus Legge. “Many farmers see it as a way to add value.”

Mr Legge, who farms 120 cattle on his 80ha unit in Monschau, west Germany, converted to organic 12 years ago when input costs began to rise.

“There are lots of farmers switching to organic, particularly in the milk sector,” he says.

Despite the premium organic offers, Mr Legge says it is still not enough for German producers to be sustainable.

“If we want to encourage investment in the industry, the organic farmers really need 50c/litre and conventional producers need to be paid 40c/litre.

“Plus with the number of producers switching to organic, I think we will have a lot of organic milk in two years.

“We need to start thinking again about what to do next to make ourselves different.”

As the first farmer in Germany to install his own biogas unit, Ralf Hickman admits the first five years were difficult.

“No one really knew how to run them,” he says. “The systems were designed for limited operation of about 100 hours/year, but we were using it for 24 hours/day seven days/week.

“After a month I was having to replace parts and get it fixed, but things are better now that fittings are being built to be more robust.”

When Mr Hickman took over his family’s potato farm eight years ago, he knew he was going to have to try something different if the business was to survive.

Spiralling input costs coupled with poor commodity prices meant the 60ha farm in Koblenz, west Germany, was – like many of the country’s family farms – struggling to make a profit.

“We needed to diversify, so I started to think about how we could make the best use of the land we had and limit our exposure to price volatility at the same time.”

The solution for Mr Hickman was to take advantage of the farm’s location in one of the most prolific pig-producing regions in Europe by investing in a 1,000-head fattening unit.

To give his investment the best chance of being profitable, he decided to create a closed system to limit the risk the business would face.

He bought a neighbouring 364ha farm so he could produce maize and grain to feed the pigs, which he buys as piglets and fattens for 105 days before selling to a local abattoir.

He then decided to invest in a biogas unit so he could protect himself from crippling energy prices.

The €1.2m 550kW and 900kW systems run mostly on farm-produced corn and manure, but Mr Hickman also has a contract with a local herbal medicine factory, where he is paid to dispose of its excess herbs and garlic.

Electricity produced on farm is either used to run the pig sheds – which he has since expanded to house 2,000 pigs across the two farm sites – or sold for 10-20c/kWh, depending on the level of subsidies.

“We sell about 4m/kWh hours a year, so we expect to get a payback on investment over 10 years,” Mr Hickman says.

“It also gives us a way of getting rid of pig manure, which is a major problem for pig farmers in this region who don’t have the space to put it on their own fields.”

“Each part – the biogas, arable and pigs – is designed to be economical by itself, but they can help each other and help remove volatility,” he says.

“For me, closed systems like this are the future if farmers are going to be able to manage their costs more effectively and make a profit.

“This is the best way I can think of to create a sustainable business I can hand over to my children.”

Diversifying into agritourism following low milk prices gave Elmar and Iris Victor an unexpected opportunity to invest in a robotic milking system – something they would never have achieved otherwise.

The couple, who farm 40 cows on their 32ha unit in Monschau-Konzen, on the German-Belgian border, were struggling to make ends meet after their milk price dropped in a year to 20c/litre (17.5p) – a loss of 19c/litre (16p).

With their farm located in the North Eifel region – an area that attracts thousands of tourists every year – they decided to open a holiday apartment within their existing farmhouse, promoting it as a farm stay where families could learn about agriculture.

The apartment proved so popular that they added more properties to the farmhouse, opening their fifth apartment in 2004.

“It has been a huge success for us, with an average of 280 days occupancy – about 80% – every year,” Iris says. “We’re able to manage everything ourselves, so we don’t have any additional staff costs, but it has provided the income we need to keep the farm running.”

Having previously used a tandem parlour milking system, Mr Victor realised he was spending a long time in the loss-making dairy when he could be helping out with the profitable holiday lets, but he needed the cows to encourage people to visit the farm.

“I wanted more flexibility and to be able to have more time for our guests,” he says. “I realised that a robotic milker could help me do that, plus it’s an added attraction for our guests.”

In November 2015, the couple invested €120,000 (£100,000) in a Lely Astronaut robotic milker, which they financed over 15 years. To keep costs as low as possible, they installed the system into their existing barn.

“You don’t get more milk from a new barn, so if the cows can manage in the old one, it made sense to keep it,” Mr Victor says. “I haven’t had to change the cubicles or the slat flooring; it just slipped straight into the existing shed.

“So far, it has been a success. The robot costs us about 6c/litre to run, but it’s worth it for the flexibility.

“While some people might buy a robot to grow their herds, for me it’s about using one to improve my opportunities. It gives me the time to focus on other challenges on the farm and ensure we are making a profit.”