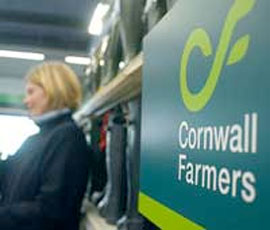 Cornwall Farmers has announced a dramatic restructuring of its board of directors and its animal feeds business in a bid to return to profitability.

The co-operative, which made a loss of £2.6m last year, has already undergone massive change, with a new executive team, the sale of its machinery business and the freezing of members’ capital accounts. The latest moves, announced at the annual general meeting last week, were the next step towards a more viable future, said chief executive Simon Birch.

“We have turned the corner, from fire-fighting to making longer term plans. The financial capital base of our business is very secure and we still expect to return to profit this year.”

The new board of directors would be slimmed down from 8-12 members to 7-9, to include two existing and two new farmer directors, two executive directors (Mr Birch and finance director Andrew Knott), and a professional independent third party. A formal recruitment process and stronger governance controls would also be put in place. “With a more focused board structure we will be better able to determine a strategy to take the business forward,” said Mr Birch.

As part of that strategy, Cornwall Farmers was forming a partnership with Countrywide Farmers to source concentrate feeds. The co-op would expand its existing Pinnacle feed range, while enjoying greater economies of scale in supplying current BOCM products.

“The combined buying power of the partners is the largest of its kind in the UK,” said Alistair Folly, sales director at Countrywide. “The agreement, which has been reached in conjunction with BOCM Pauls, enables all three businesses to strengthen their respective positions in the feed supply chain whilst continuing to operate independently in the marketplace.”