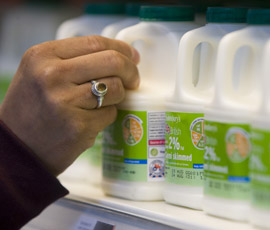 Sainsbury’s is to introduce a new cost of production based pricing model for its dairy farmer suppliers from next month.

The model, which has been developed with Kite Consulting, sets the farmgate milk price for Sainsbury’s Dairy Development Group members based on actual production cost data collected from the 324 SDDG farms.

It includes a provision for family labour and capital investment and some of the more volatile costs, namely feed, fuel and fertiliser, will be reviewed on a quarterly basis in April, July, October and January.

From 1 May, the price will be set at 30.30p/litre for a standard 1m litre producer, although this includes a bonus for meeting minimum welfare and environment standards.

All SDDG suppliers will be moved on to the cost-based pricing model, unless they decide to leave the SDDG before 1 May.

Sainsbury’s chief executive Justin King said the fact that farmers had voted overwhelmingly to adopt the model was a real sign of confidence at a time when the costs of producing milk were so volatile.

“This is great news for farmers and testimony to the incredibly close relationships we’ve built over the past five years through our industry-leading Dairy Development Group. We’ve invested £40m and seen significant advances in animal welfare and environmental standards, in turn saving our dairy farmers over £10m.”

SDDG Steering Group representative Ben Jack added: “This confirms Sainsbury’s huge commitment to its liquid milk suppliers and will enable the SSDG to move forward and promote the terrific work that has already been achieved.”

The Sainsbury’s pricing model is slightly different from the Tesco/Promar cost-tracker contract, which uses budgeted production costs for the year ahead, reviewed on a six-monthly basis.

Sainsbury’s pricing model forms part of its 20 by 20 Sustainability plan, which aims to source all key raw materials sustainably to an independent standard by 2020; to double British food sales; become number one for animal welfare; and to put all waste to positive use.