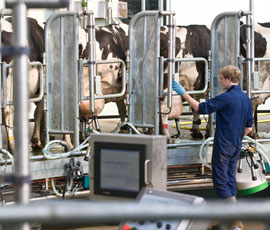 Cost-plus milk contracts in their current form fall far short of accounting for the true cost of milk production and won’t ensure the future of dairying, accountant Old Mill has warned.

Every model Old Mill has seen falls far short of those true costs because they failed to account for producers being paid a proper salary and to account for the cost of the huge amount of capital tied up in the business.

Some which included a notional salary for the producer put this at just £15,000 a year. “Considering the high level of skill and dedication dairy farmers put into their business, they should command a salary of at least £35,000, and potentially up to £50,000,” said partner Mike Butler.

“A good herdsman will cost £40,000 when you take into account accommodation and taxes – so the person actually running the business is surely worth more than that?”

However the biggest shortfall was the lack of proper costing for capital involved in the business. “If you were to go and buy or rent a farm with cattle and milking facilities, it would cost an enormous amount,” says Mr Butler.

“Even families who have invested over a number of generations to build up equity without debt should include the opportunity cost of that capital, as it could be invested elsewhere to give a far greater return than dairying.

“No supermarket or processor would invest in facilities and ignore the cost of that capital when drawing up budgets. Farmers should not be any different.” For example, a new entrant borrowing at 5% interest to set up a dairy enterprise at £7,500/acre and taking a wage of £30,000 a year would need more than 40p/litre just to break even.

“Considering the high level of skill and dedication dairy farmers put into their business, they should command a salary of at least £35,000, and potentially up to £50,000.”
Mike Butler

“Some might say that is unrealistic, and yet we wonder why there are no new entrants in the industry,” said Mr Butler. “Clearly, the low milk price makes it completely unrealistic for all except those who are prepared to accept a pittance wage with no return on the thousands of pounds of capital invested in their business. That surely is not a model for the future.”

While acknowledging that milk prices had to take reference from global dairy commodity markets, Mr Butler said that liquid milk was a staple food requirement.

“If retailers do not pay enough to ensure a sustainable future for the industry, it will be to the detriment of the entire nation.

Cost-plus contracts could only be the way forward if all of a farm’s true costs were included.

“It is essential that consultants who work with the supermarkets producing these cost-plus contracts ensure that their model is both complete and accurate, and reflects the true cost of production. To do anything other than this will be a disservice to the industry they claim to support.”