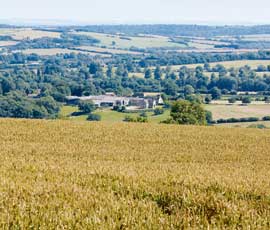 Almost 500 acres in the Cotswolds will hit the market next week and scarcity value puts a £7.7m price tag on Whalley and Puckham Farms.

The two farms at Whittington, close to Cheltenham, have been farmed as one by the same family since 1937. The mixed arable and pasture land has two farmhouses, two cottages and extensive offices and comes to the market for only the second time since 1880.

Retirement brings the holding to the market, with the dairy herd having been sold last year, said Savills’ Douglas Mackellar. The farm is offered in three lots and while not excluding the possibility of a farmer buyer, Mr Mackellar thinks it most likely that residential interest will win the day in this sale.

Most of the buildings are at Whalley Farm, with supplementary buildings at Puckham.

The main farmhouse is Grade II listed and there is planning consent to replace the second farmhouse, built in the 1970s, with a 6,000sq ft dwelling.

Apart from an attractive location, the farm has several interesting features, including underground stone mines believed to have provided stone for repairing the Houses of Parliament and several prominent local buildings. The remains of a Roman villa have also been found on the farm.

Whalley Farm makes up the principal lot, with the listed six-bedroom farmhouse, two semi-detached two-bedroom cottages, a stone office barn conversion and a large range of dairy, livestock and arable buildings together with 373 acres of land.

The land here is split between almost 242 acres of arable/rotational pasture, 84 acres of permanent pasture and 23 acres of woodland.

The final lot is 89 acres of mainly arable land to the south of Whalley Farm. The farm is in the Entry Level Scheme and single farm payment entitlements are included in the guide price. (Savills 01242 548 020)