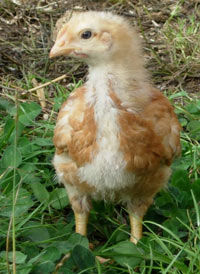 Two poultry novices who set up an organic chicken farm three years ago are going from strength to strength with their award-winning chicken.

Three years ago Paul Sykes was a successful commercial truck salesman with a hankering to get into poultry farming.

Despite having no farming experience, he and his wife Clare sold their house to fund a new organic poultry unit near Faringdon, Oxfordshire – and they haven’t looked back.

“I’ve always had an interest in agriculture and growing my own food,” says Mr Sykes. “I fell into selling commercial vehicles after I left school, and was good at it, but was never really happy. I grew up in the countryside and felt there was something missing.” 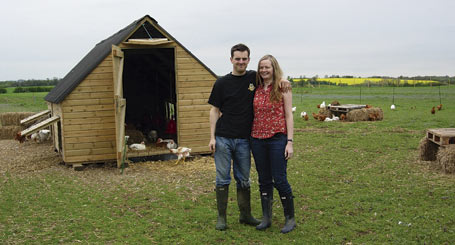 To fill the gap, Mr Sykes worked for a year with a local vegetable producer. But it was the farm’s chickens that he fell in love with, and he decided to set up his own free-range unit. “We felt that there was a gap in the market for really good organic chicken reared locally on a small, traditional scale,” he says.

The couple rented 4ha (10 acres) at Westmill Farm, and visited a small-scale producer in Devon to get some ideas for their own unit. They installed mobile sheds, registered as organic producers, and bought their first 100 chickens. “We didn’t have any idea what we were doing; we had no experience whatsoever,” says Mr Sykes. “It’s more scary now, looking back, but at the time it was just very exciting.”

It took five weeks for Mr Sykes and Clare to sell their first batch of chicken, as they were oversize. “We decided to weigh them after that. It’s been a steep learning curve, but Humphrey Feeds and the hatchery have been very supportive,” says Mr Sykes.

They arranged the sheds along a line of pasture for easy rotation, and planted cover strips to provide shelter for the chickens, with a maximum of 300 birds in each house. “We believe that small is beautiful and pushing the standards to the limit is wrong.” The chicks remain in the same house throughout their lives, to reduce stress and boost immunity.

The couple now have 2000 chickens on the farm, and recently installed a second-hand processing line to enable them to slaughter on-farm. “We didn’t mention it to our customers, and 80% of them asked what we’d done to our birds because they tasted even better than before,” says Mr Sykes. The slow growing Hubbards are slaughtered individually at 10-12 weeks old, and hung for 24 hours before eviscerating and packing. “It makes such a huge difference.”

Although they started by selling at local markets, the couple found that people in the area were not prepared to pay premium prices for organic free-range chicken. Fortunately, after 18 months on the waiting list, they secured a stand at Notting Hill market in London. “That really helped us. A lot of our customers are die-hard foodies who aren’t prepared to compromise. We haven’t lost any customers at all, despite the economic climate.”

They also sell at Stroud farmers’ market, online at www.claresorganics.co.uk, and deliver chicken boxes throughout the local area. “Having the right market is very important – we can produce the best bird in the world but if people aren’t prepared to pay for it there’s no point,” says Mr Sykes. “Coming from a commercial business background has helped – but I’m not saying we get it 100% right.”

The business started to turn a profit after just two years, and Mr Sykes hopes to continue to grow, either via another farmer’s market, or through local high-quality supermarkets. “We bought bigger sheds than we needed so we could expand – I’d like to double our production, but I don’t think we’re going to get rich.”

He is also convinced that remaining small-scale with excellent attention to detail is the key to producing chicken that tastes like it used to. “We are passionate about food and believe that treating animals with the respect they deserve makes for the very best produce. That’s why our customers keep coming back for more.”

Clare’s Organics has twice been nominated in UKTV’s Local Food Heroes, and last year was Highly Commended in the Soil Association/The Times Organic Food Awards. “We were really pleased with that,” says Mr Sykes. “We’ve got an established system now and it works for us – it hasn’t been easy but we are both very happy we’ve done it.”

More recently, they have been shortlisted for the Made in Britain Awards 2009 for the quality of their whole organic chickens.