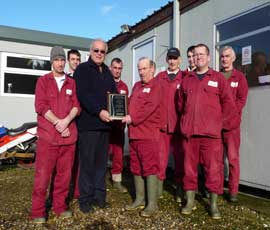 A turkey breeding farm producing poults for Cranberry Foods has won an award for running the best-performing flock of Hybrid Grade Maker parent stock in the world.

The award was made by Dennis Bauman from Hybrid Turkeys, which owns the Grade Maker breed, in recognition of the exceptional productivity achieved by Cranberry Food’s Foston Lane breeder farm near Driffield, North Humberside, in 2010.

According to Cranberry’s agriculture director, Clay Burrows, production was to 24 weeks in lay, with 116.26 eggs produced, resulting in 103.4 poults a breeder hen placed. Average hatchability an egg set came to 88.74%

Hybrid Turkeys is a division of Hendrix Genetics, and sister company to ISA laying hens. Its head office is in Ontario, Canada.

Cranberry Foods is the country’s second largest integrated turkey meat producer, with a turnover of £82m and 72 farms. It operates at every level of production from breeding turkeys to delivering fresh and frozen turkey products.