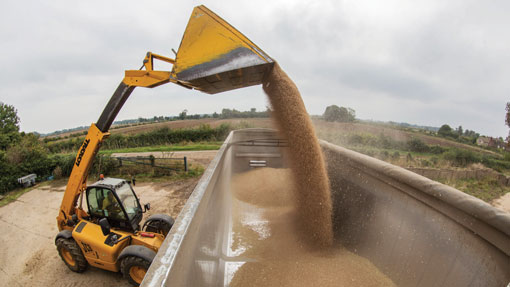 UK grain market prospects for the coming season depend on re-entering the wheat export market, assuming a decent size and quality of harvest.

With crops looking good, there is a reasonable prospect of the UK producing 15m tonnes of wheat, compared with 13m tonnes in 2012 and 12m tonnes last year. However, this brings its own marketing challenges.

To export, we need to be competitive and a strong sterling/weak euro are not helping in this respect, although the price gap between the UK and our immediate European competitors in export markets has narrowed recently so that the UK is about £6.50/tonne more expensive than French wheat.

UK wheat also needs to offer millers and bakers a quality and price which will challenge the reliable German wheats that millers have got used to ordering over the past couple of seasons. This trade has developed rapidly, driven by the quality failure of the 2012 crop and the small size of the UK wheat crop in 2013.

There is currently a £20 to £25/t premium for full specification breadmaking wheat, reflecting the relatively small percentage of the area given over to suitable varieties.

In this transition phase between old and new crop, there is much speculation about how much old crop there is left in store. A kinder spring has kept a lid on demand for compound feed while a huge barley crop and imported maize are making up for lower wheat stocks.

With grain prices having been on the slide for several weeks, it’s all too easy to be negative and assume that markets will move lower, says Mr Watts. Both traders and analysts remind growers of the volatility of the past few seasons. “We have seen a turnaround at a later point than this,” says Mr Watts.

“However, not just for the UK but globally, it’s [harvest] not a done deal – for its full potential to be reached, the weather must continue to be supportive of UK wheat.”

Jake French of ODA thinks the downside is limited – just as the jump to about £160/t was inflated, so the fall has been too, he says.

“We may not see so much out of the Black Sea region,” he says. “There has been a big drop in sales of certified seed and farm saved seed has a lower yield potential – there are difficulties in funding input purchases as the Ukrainian currency has fallen in value by 30%.”

The US Department of Agriculture is predicting its corn yields at 165 bushels an acre which is a seriously optimistic production level, he says. “We’ve only seen that once before, in 2008.”

At Openfield, head of exports and risk David Doyle reckons that about 25% of wheat is sold and priced. He too warns that production remains uncertain and thinks that after two different but highly challenging years, growers’ reluctance to commit is about more than price.

“They have had £50/t to play with – anyone who wanted to commit could have done so earlier at a satisfactory or profitable price,” he says.

Consumers have been reluctant too, nervous and wanting market clarity – on the other hand the negative tone of the past few weeks has given some confidence, in turn making them reluctant too.

“The market is relying on last year’s stock build up to create this general negativity,” says Mr Doyle. “We’ve got enough [grain] globally but if we’re relying on the release of stocks to balance out supply and demand then logistics will be crucial [if price swings are to be minimised].”

The new crop wheat price has yet to come down and reflect the potential exportable surplus, says Mr Doyle and this could see the spread between wheat and barley prices narrow.

Although there now seems to be no such thing as a “normal” year in grain, Gleadell managing director David Sheppard would expect to see about 45% of grain committed and priced at this stage in the season, but he reckons it’s probably at about 20%.

The outlook is for a large EU crop with better UK rapeseed and wheat crop prospects but there will be price spikes to sell into, he says.

Jonathan Hoyland trades barley for Frontier Agriculture and says the commodity is relatively volatile; old crop stocks at 100,000 to 200,000t are not nearly as heavy as they could have been, thanks to a successful export campaign.

“It looks like a 10 July harvest start in southern England and we are nearly competitive on an EU level for exports. Price movements now depend on how much has to move in harvest slots here and in competing countries,” he says.

El Niño: There is a rising possibility of an El Nino weather event in 2014 – currently a 70% likelihood. This is a weather cycle which every two to seven years typically brings drier weather to south east Asia (negative impact on palm oil production) and Australia and can cause severe drought. It can also lead to stronger winter storms in the southern US and a greater risk of Pacific cyclones and typhoons. A consequence of an El Nino can be higher rainfall in South America, which could boost oilseeds production there. The peak impact of an El Nino can occur around the end of the year in which case it would mainly affect 2015 crops.

A different mix: Given the many grain production and market challenges over the past four years, a “typical” or “normal” year and yields might now look quite different. For example, of the 40 winter wheat varieties on the recommended list, 29 have been added since 2010 – Jack Watts, HGCA.

Contracts: There have been some interesting contracts around – some guarantee a minimum price with the grower retaining the option to benefit from any subsequent price rise. This type of contract is fine but growers should consider whether they are getting a fair base price – some are discounting it by £15/t from the market price and that is too much – Jake French, ODA.

“Barley is at a £14 to £15/t discount to wheat, probably a bit less in England, but it all depends on the relative value to the French price and to maize.”

Although there are restrictions on how much can be used in different rations, compounders will currently take barley in preference to wheat once it gets to a discount of £8/t or more, although for ruminants it currently needs to be at about £15-17/t while pig and poultry users will want to see an £18-20/t discount.

The spring barley crop will be a lot smaller than last year and the market is reflecting this with a premium of £20 to £25/t above the feed barley price for brewing and offering a further £10/t for distilling which requires a lower nitrogen content (1.6 to 1.65max) and prefers Consort and Optic, but will take Tipple and at a pinch Propino, says Mr Hoyland.

2014 was a good year for UK malting barley exports and the trade is quietly confident of a similar story for the coming season.

Feed barley is currently struggling to compete with wheat on export markets and is certainly more expensive than Black Sea maize, says Mr Hoyland. “Even with a smaller crop we’re probably still looking at a 900,000t surplus to export (against 1.2m tonnes shipped this season). Forage maize is competing with UK barley into its normal homes such as Ireland and Spain.

In Scotland, probably 80% of malting barley is committed on a tonnage contract with a pricing mechanism, similar to other years, he says. “It’s a question of whether yields will be good enough to give growers some free market barley over and above their contracted tonnages.” However, very little feed barley is committed in Scotland, which tends to be more of a post-harvest market.

The UK produced its biggest oat crop for 40 years in 2013 but the stock carryover is not as bad as it could have been.

The winter and spring areas have both fallen, says Mr Hoyland. “If we don’t need to import oats then the milling oat price will settle somewhere between barley and wheat price.” It is currently in the mid-£120s/tonne for harvest.

“If Sweden and Finland have quality issues, they will be customers for UK oats. If we have good bushel weights and low dressings we can compete on export markets – if not, then it will be feed oats to Spain and that can be painful.”

The EU rape crop looks superb, says Gleadells’ Jonathan Lane, with the outlook for a crop of at least 22m tonnes against 19m tonnes in 2013.

Although world vegetable oil stocks are high (Canada expects to carry over 9m tonnes of oilseed rape), demand is high too.

As with cereals, growers have been very reluctant to sell oilseed rape, with about 25% of the crop sold compared with the more usual 35-45% at this stage. “That 10% behind is reflected right across Europe,” says Mr Lane.

The weak Euro and the possibility of quantitative easing could reduce Euro interest rates even further and see the euro drop to 1.25 against the pound, says Mr Lane, increasing the challenge for exporting from the UK.

“Every cent off the value of the Euro is another £3/t off UK rapeseed prices,” says Mr Lane.

“As we get towards harvest we will have to price rapeseed at a level to export. We’ll probably have a big export campaign at harvest. Crushers and merchants won’t be keen to tie up the cash to store it. I wouldn’t be surprised to see some significant pressure at harvest – £250/t is definitely on the cards.”

Much depends on what happens in the soya bean market – while Mr Lane thinks rape prices will probably flatline after harvest, there is the possibility of a rally.