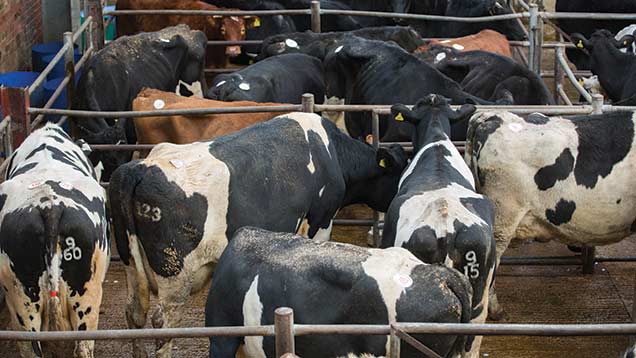 Cull cow values are looking strong on the back of good retail demand for cheaper beef.

The GB average deadweight price remains above 230p/kg and close to last year’s levels, despite numbers last week being 52% higher on the same time in 2014.

Trade at auction marts is also impressive, with the GB average liveweight price creeping up 0.5p to 114.5p/kg in the week ending 21 March.

Market throughputs are closer to 2014 levels, with auctioneers reporting that buyers seem happy to pay good money for all beasts forward.

Peter Kingwill of auctioneer Hobbs Parker said the cull trade was the positive story in beef at the moment, even though the strong pound against the euro was making export difficult.

“They are a lower-price product, it ends up being cheaper beef and there is such increasing strength in the mince market,” he said.

“There are no great numbers coming out. A lot of dairy farmers did a lot of their culling going into the winter and they may have another clearout when cows go out to grass.”

Jim Dunn of Caledonian Marts said cast cow throughputs at Stirling were about 15-20% down on the year.

He said supermarket demand was high for products such as burgers, with the clean cattle trade likely to pick up as Easter approached.

“It almost seems the buyers are working harder to get the cast cows [than the clean cattle],” he said.

The 211 cull cows forward, including 190 dairy cattle, at Beeston Castle on Friday 20 March saw a flying trade for all grades, according to the auctioneers’ report.