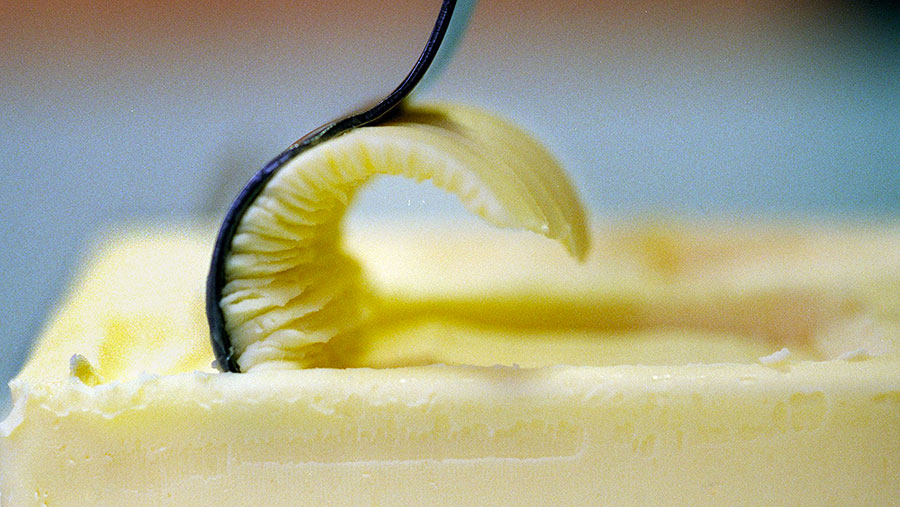 Dairy farmers have been warned not to react suddenly to fears of a national butter shortage this winter.

Comments made in an interview with the boss of the country’s biggest processor on Thursday (6 July) blazed across the media.

On Friday morning, Britain’s top-selling paper, The Sun, splashed across its front page worries of the ‘biggest butter shortage since World War Two’.

Healthy demand for butter and cream has been one factor in the fragile market recovery, which has given farmers relief after the two-year slump.

But the national attention has come just as dairy experts told producers not to ramp up their milk supply, which could send prices crashing again.

The co-op boss added that all processors were trying hard to get as much butter and cream out of their milk supplies as possible, which was difficult as farmers across the world had cut production back in 2016.

“Farmers need to produce more and we are getting into that territory now,” Mr Tuborgh said.

As Arla’s comments were picked up nationwide, the farm unions rushed in to suggest that farmers needed to be careful.

Fundamentally dairy farmers are weary of the simple lack of fairness, the lack of respect, and the lack of collaboration to manage the key challenges of volatility Sian Davies, NFU chief dairy adviser

NFU chief dairy adviser Sian Davies said the “constant boom and bust cycle” helped farmers least of all, as they carried the biggest risk from volatility.

“Farmers need to be demand led, they need better market signals,” Ms Davies said. “Only a few months ago farmers were being told there was too much milk, it’s gone full circle.”

“This isn’t sustainable from a farmer point of view, and we need to find a better mechanism to work together with the processors.”

NFU Scotland policy manager George Jamieson said the potential shortages were no surprise, as some supermarkets were already “rationing” butter.

But he said farmers needed better contracts, pricing and volume transparency, and longer-term planning across the supply chain.

“Fundamentally dairy farmers are weary of the simple lack of fairness, the lack of respect, and the lack of collaboration to manage the key challenges of volatility and wafer-thin or non-existent margins.”

In the last fortnight, Arla and Muller both cited the improving commodities markets as they raised milk prices for the summer. But dairy farm finances are only just beginning to bounce back.

Research from AHDB Dairy shows that fewer than 20% of herds were able to cover their full production costs in the year to March 2017.

About two-fifths of producers could not even cover their cash costs and were classed as “vulnerable”.

“Farmers need an extended period of profitability to reverse the impacts from the last couple of years,” AHDB said.

Speaking to Farmers Weekly, an Arla spokesman said Mr Tuborgh’s comments were about the worldwide situation in the dairy markets and were not intended as a signal to producers.

Any instructions about managing supply would be made directly to Arla members, the spokesman added.

British butter and cream prices have been leading the wholesale dairy trade upwards, which in turn has supported farmgate returns.

Prices for both fats have doubled in the last twelve months.

Demand for cream and butter has been strong, while butterfat availability has not been great, with the seasonal decline on top of lower-than-normal levels, the levy board reported.

Milk deliveries from British farmers are currently running 0.5% below the same week in 2016.

Across Europe, production is only just creeping above year-before levels.