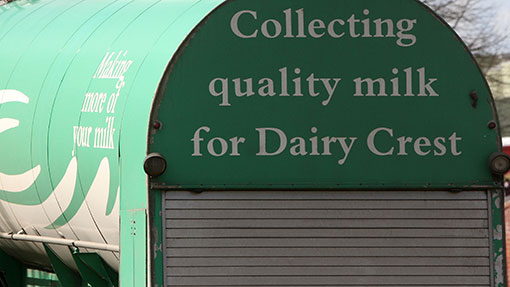 Dairy Crest has dropped its milk prices for the third month running, taking another 1.3p/litre off both its main contracts.

Farmers on liquid contracts will be paid 27.04p/litre from November, while those paid the manufacturing price will receive 29.04p/litre.

The liquid price is now 5.4p/litre lower than in April and the manufacturing price is down 4.15p/litre.

Lobby group Farmers For Action had announced protests could start in the next 10 days if more cuts were announced.

Dairy Crest group procurement director Mike Sheldon said the situation in global commodity markets has not improved and this had to be reflected in November’s milk prices.

“This is a challenging time for the dairy sector and all of us who work in it,” he said.

“We hope the dairy markets will return to a steady footing soon, but in the meantime we will continue to work in partnership with [suppliers’ group Dairy Crest Direct] to deliver a robust support package for all of our supplying farmers.”

“DCD has strongly defended member interests in price discussions Dairy Crest and has achieved significantly smaller price cuts than applied by many competitor dairies,” he said.

“However, we underlined the damage that will be caused through the relentless pace and severity of the cuts, with November pricing now below recognised cost-of-production trackers.”

The Dairy Crest/DCD cost-tracking formula contract fell by 0.498p/litre to 31.234p/litre for October, as milk, cream, fuel and feed costs all dropped.

But it will keep a 2.8p/litre premium over the Dairy Crest standard liquid price, even before the 0.19p/litre early sign-up bonus.

More than half of Dairy Crest’s 400 liquid producers now have some milk committed to the formula.