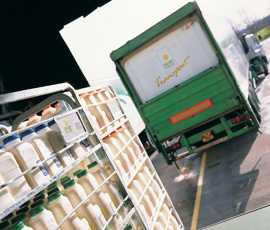 The cut will mean a £53,000 a year loss for its average non-aligned milk producer, assuming the break even production cost of 29.33p/litre calculated by Kite Consulting.

Dairy Crest’s standard litre price drops to 24.92p/litre from August 1, following a 2p/litre cut in May but the company has committed to no further price cuts for the rest of this year.

“The floor does provide some opportunity for planning on farm going forward,” said a statement from DCD which represents the 650 affected Dairy Crest Direct suppliers.

Tough market conditions had forced the cut, said Dairy Crest, which had begun talks to review the mechanism for price negotiation, said a spokesperson.

A rationalisation plan at the company includes the closure of two of its liquid dairies in Cambridgeshire and Liverpool together with a thorough review of all aspects of its operation.

“We have a clear and robust plan for the long term future of our dairies business and we are making progress in what remains a very difficult environment, said group Milk procurement director, Mike Sheldon.

“We have maintained our liquid milk price for 3 months while we have worked hard to achieve greater operational efficiencies and selling price increases. We are acutely aware of the impact this price reduction could have on our farmers but we have to look at affordability and take responsible action when required. We have agreed that we will not reduce milk prices again this year”.

Following vociferous protests after the last price cut in May at just four day’s notice, Dairy Crest has agreed to give a minimum of four weeks’ notice in future.

“I know this latest price cut will be a great disappointment but I can assure our farmers that as and when market conditions improve sufficiently we will be looking to increase the price again.”

Dairy Crest has confirmed that the milk price for its Davidstow cheese contract will be maintained at the current level of 28.22p/litre, which tops the league table for all major cheese processors.