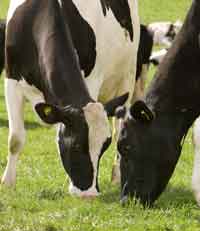 In response to rising costs and falling profits, Mile Bridge Dairy Unit, Lydney, has taken drastic steps, making the decision to move from a high-input, fully-housed system to a low-input, grass-based system, housing for only four months of the year.

And since changes began in the spring of 2007, the farm has managed to cut costs by £110,000 a year, according to herd manager, Keith Davis.

Speaking at a Livestock Improvement Corporation open day, Lydney Park, Mr Davis said when cows were fully housed and milked three times a day it was almost impossible to make a profit.

“The move away from our intensive system was purely cost driven – we started by looking at a nearby organic, grass based system, however we soon realised the money to be gained was through profit from grass, rather than organic.”

“The whole process was a feasibility study – the costs had to add up – and our initial workings looked good,” Mr Bailey explained.

And following discussions with estate owner, Lord Bledisloe, the decision was made to overhaul the system.

The farm is now milking 450 Holsteins, twice a day, in two spring and autumn block calving groups and crossing with New Zealand Friesian and Jersey genetics.

We are still supplying a liquid milk contract, said Mr Davis. “I would rather increase cow numbers to sell as much milk as I can and cut costs as much as possible.”

However, to achieve these savings, the farm has had to undergo a series of major changes.

“We essentially had a blank canvas when it came to paddocks,” he said. “We started by fencing the field parameter and then dividing into paddocks averaging about 5ha in size. We now have a series of semi-permanent fences.”

Providing good cow tracks and water supply was imperative, Mr Green explained. “If you are not prepared to put tracks in, there is no point in doing this system.”

In terms of water supply, the farm already had a 2in ring main around the farm which was split off for paddock troughs, said Tim Thompson, head herdsman.

“The key is also to have multiple entry points to paddocks to give more options for access and allow cows to be kept out longer,” he said.

Despite cows being outside longer, they cows have adapted well, explained Mr Davis. “We are still working with the same Holsteins we have always had, but we have seen considerable fertility improvements since cows moved outside.

“Before the changes we were losing money because of our high culling rate of 30% and a calving interval of 430 days. The fully housed system literally ate money. However, the answer in the new system is to simplify and don’t spend as much. And more importantly, it works.

“We now have a 45% conception rate to any service, compared to 30% when cows were housed and we hope to get better still,” said Mr Davis, who puts this down to less stress from housing and less production pressure.

And Holsteins can learn to graze, they just need to be protected during the transition, said Mr Davis. “We feed a good amount of concentrate in the parlour to prevent the cows from crashing. However, we don’t intend to do this down the line when breeding and fertility has been addressed.”

Mr Davis’s aim is to eventually calve the whole herd in one spring block, but because of poor fertility he has chosen to keep two blocks until they get the genetics and fertility right. “We will also need to calculate clear budgets to ensure moving to this system is beneficial. However, there is potentially a 3-4p/litre minimum saving from moving to spring calving.”

Block calving in two blocks keeps the system simple, said Mr Green. “We have a cycle of three months calving and three months serving meaning farm staff can focus on one thing at a time.”

And by making the system simpler, the farm has also halved the labour needed.

Intensive pasture management is also critical to the new system, ensuring cows are given the best opportunity to produce the most milk and solids they can.

A grass plate meter is used every week to produce a feed wedge, explained Mr Davis. “Grass growth is monitored and budgeted religiously using the feed wedge – this allows Mr Thompson to decide whether we split paddocks into 12 or 24 hour breaks.”

Ideally cows are grazed on a 12 hour break so they go on to a fresh bite. Grass is then grazed to a residual of 1400-1500kg/ha DM and any surplus is used for silage.

Currently grass growth is not enough so cows are buffer fed 9kg DM of grass a cow a day and 7kg DM of a 50:50 maize and grass silage mix, said Mr Davis. “Autumn calvers are also getting 6kg of concentrate in the parlour.

“When cows were housed, the farm was using 3.5t of concentrate a cow a year. This figure is now at 1.3t and eventually we hope to achieve 6000 litres on less than 1t of cake a cow a year.

And total costs are now at 21p/litre, compared to 25p/litre before. “Our aim is to reduce these further to 17p/litre,” he said.

All cows were fully housed on the 10th November last year. This year it is hoped to get this date nearer to the end of November.

But, dry cows, spring calvers and in-calf heifers are out-wintered on kale. “This costs us 70p a head a day compared to £1.40 a cow a day to house.”

Despite cattle numbers increasing by 150, vet and medicine costs have dropped by £25,000 a year, said Mr Davis.

Keeping calves outside from one week of age has been beneficial to calf health. “When we kept calves inside we had a high incidence of pneumonia, now we see little disease and have few losses.”

The change in breeding has also resulted in easier calving and more live calves. “This autumn we calved 120 cows and had 120 live calves and had one case of milk fever.”