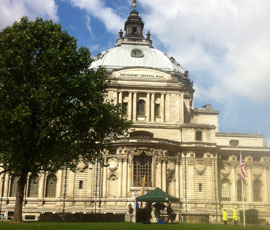 Hundreds of dairy farmers are arriving in London this morning to fight back against price cuts that have wiped more than £50,000 off the average farm income.

Organised by the NFU, the emergency dairy summit is due to take place at Central Hall, Westminster, at 1pm on Wednesday (11 July).

More than 2,000 farmers are likely to descend on London to protest against low milk prices, suggest the latest estimates. At least 37 coachloads of farmers and supporters from across England and Wales are expected to arrive in London ahead of the event.

Exact numbers are difficult to determine, but Farmers Weekly has contacted each NFU regional office to compile an estimate of those intending to travel.

Coaches are full to capacity in some areas, with a waiting list of would-be passengers. Hundreds more farmers are expected to travel to London by minibus, car and train.

The auditorium at Central Hall – which can hold 2,200 people – is expected to be packed for the event, which is due to run from 1pm to 3pm.

Those attending will be addressed by farm minister Jim Paice, NFU president Peter Kendall and other representatives from the dairy sector.

A series of reductions in the farmgate milk price of up to 4p/litre will knock more than £50,000 off the average dairy farm income.

Such significant price cuts will drive farmers out of the dairy industry, which is united in its demand for an immediate reversal of recent and planned cuts, the NFU has warned.

The union has warned that processors will face further protests unless all milk price cuts imposed on farmers since 1 April are restored by 1 August. The summit will act as a catalyst for that reversal, said the NFU.

It is calling for a wholesale change in the dairy sector so farmers are not forced to sell milk at less than the cost of production.