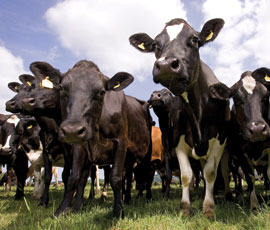 Dairy farmers and industry leaders have reacted furiously to the 1.7p/litre reduction in the farmgate milk price announced by Robert Wiseman Dairies.

Cheshire dairy farmer Tony Garnett described the cuts as a “savage blow” to the dairy industry.

“The industry cannot stand that. There’s going to be a huge number of people going out of production,” he said.

“There’s lots of borderline cases right now, but to have nearly 2p/litre knocked off is enormous – it’s not sustainable at all.

“We are in a free market and this is the sort of risks we’re open to.”

His production costs were not falling, he added, and despite a “bit of pressure” on milk prices worldwide, a price cut of nearly 2p/litre seemed a “bit severe”.

Mr Garnett supplies Wiseman via a contract with Sainsbury’s, which has just announced it would be awarding their dairy suppliers with a 0.26p/litre increase from 1 July. He said he felt fortunate to supply a supermarket that recognised the importance of paying their farmers for the cost of production.

“We’ll have to wait and see how this will all affect us. But I think it’s going to be difficult to make anything like a profitable industry at that sort of level of payment,” added Mr Garnett, who is also chairman of the Cheshire Show.

“I guess there will be a lot of herd sales coming up shortly. Others will say it does not just stop with them (Wiseman). It’s a major worry that other processors will react by lowering their prices too.”

However, some dairy farmers blamed big supermarkets for putting pressure on processors to make price cuts.

A second Cheshire supplier, who did not want to be named, said: “It’s going to start a precedent.

“The problem is that the processors now are in the position we were in prior to the direct contracts coming out.

“Any movement that the supermarkets want to make on the processors is having to be taken by them. They are getting squeezed more than us.

“Unless the processors pass the supermarket cuts on, they will be operating at a loss like we were when there were no direct contracts.”

NFU dairy board chairman Mansel Raymond said: “This cut is a catastrophic example of the hypocrisy and unfairness that prevails in certain parts of the British Dairy Industry.

“Wiseman have blamed the falling cream values that are causing losses in their business as their reason to cut farm gate milk prices; So how can it be right for a processor to just pass this loss onto their farmer suppliers?

“As highlighted by Sainsbury’s announcement of a cost of production linked price rise to suppliers today, the cost to produce a litre milk on farm is now well over 30p, yet Wiseman will now be paying their suppliers 24.73p/litre. This is simply a hospital pass by Wiseman to their already beleaguered farmer suppliers.

“If Wiseman have sold processed liquid milk into the market place at a price that can only cover costs of production, when propped up by record high cream values like those seen in April 2011, then their business strategy is totally unsustainable and farmers will be considering their options going forward.”

NFU Scotland said the 2p/litre price cut in June, followed by the 1.7p/litre cut in August would send shockwaves through the dairy sector.

For an average Wiseman supplier, producing around 1.4 million litres of milk a year, these two cuts equate to a potential reduction in annual income from milk sales of more than £50,000.

Chairman of NFU Scotland’s milk committee Gary Mitchell said: “The seriousness of this price move should not be under estimated by any in the dairy supply chain or our politicians.”

He urged other processors to consider the importance of delivering a fair price, confidence and stability to their suppliers rather than following suit.

What’s your reaction? Take part in our poll on the milk price cut news