British dairy farmers lost out on £575m between March and November 2007, due to an “excessive” time lag between rises in dairy commodity price translating into higher farmgate prices.

That was one of the key findings of DairyCo’s latest Dairy supply chain margins report, announced at the Dairy Event and Livestock Show yesterday (17 September).

“We would always expect a time lag between the global markets rising and the farmer seeing the gains, but in 2007 this appears particularly excessive,” DairyCo’s Huw Thomas said.

“If milk purchasing agreements between farmers and milk buyers were more transparent, and price fixing periods were better aligned with notice periods, it is likely the market would have operated more efficiently and dairy farmers could have seen more of this money in their milk cheques.”

“This is due to a worldwide shortage of supply which meant UK mild cheddar manufacturers were less likely to have their wholesale prices undercut by manufacturers from abroad.”

Average farmgate milk prices increased by 2.9p/litre from 2006 to 20.9p/litre, while the average retail price increased by 4p/litre to 55.6p/litre, the report found (see image 1 below).

Effectively, about 73% of the increased milk price paid by the consumer had been passed back to farmers, with the difference largely due to increased costs of production throughout the supply chain, together with increased world dairy commodity prices and general food price inflation, it said.

“The pressure on dairy farming continues with a sharp increase in farm input costs,” Mr Thomas added. “In many cases this will have cancelled out the benefit of any higher milk prices, suggesting long-term profitability for British dairy farmers is still at risk.” 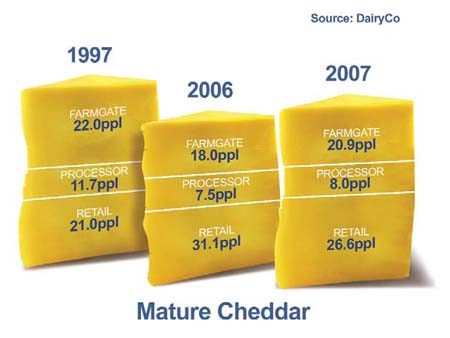 Visit www.dairyco.org.uk to download a copy of the report.