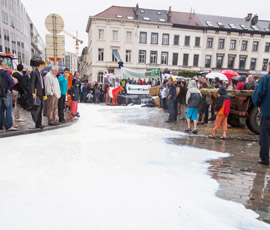 European dairy farmers’ anger over low milk prices spilled into Brussels with a mass protest outside the European Parliament.

The European Milk Board (EMB), which represents 100,000 dairy farmers across the EU, is calling for a programme of voluntary reductions in production which would allow producers to cut milk output by up to 25% of their quota.

Under their proposals, there would also be financial compensation for the value of the production lost.

Furious EMB producer members gathered outside the parliament on Tuesday (10 July). They brandished placards calling for a fairer deal for dairy farmers and installed an overflowing “milk lake” on Place du Luxembourg as a mark of the current overproduction in milk markets across Europe.

Hundreds of EMB members travelled to Brussels from countries including Belgium, France, Germany and The Netherlands to join in the protest against the mismanagement of the milk market.

The group said overproduction on the European milk market is leading to a drastic fall in milk prices and leading directly to the next milk crisis.

EMB said the surplus of milk in the market was pushing prices to the floor and the survival of farms could not be guaranteed this way.

Under CAP reform, European dairy farmers are calling for the introduction of a voluntary supply constraint and the setting up of a European Monitoring Agency, to restore the balance between supply and demand.

EMB president Romuald Schaber said: “The only way to alleviate the situation is to reduce production, preferably by a voluntary supply constraint in the short term.”

The European Milk Board (EMB) is the umbrella organisation of dairy farmers’ associations in Europe, which includes the UK and Ireland.

It currently represents 19 organisations from 14 European countries, with a total of 100,000 dairy producers. Approximately 75% of the milk in Europe is produced in EMB member countries.

• See our dedicated page on the milk price cuts

Poll: What’s your reaction to the milk price cuts?