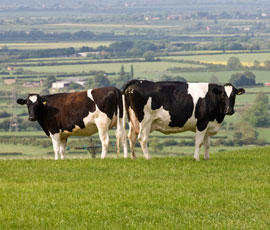 The impromptu action caused significant disruption in the distribution of milk and milk product supplies at both sites for six hours, from 6pm to midnight.

FFA vice-chairman Andrew Hemming said: “The message coming back loud and clear was that there would be no more milk price increases in November/December, but there may well be some in early 2013.

“We believe this is totally unacceptable in view of what other dairy processors are proposing to do.”

Two other major milk suppliers, Arla and Dairy Crest, were “making noises” about finding more money for dairy farmers before Christmas, he added.

“Dairy farmers have suffered five months of producing milk at a loss. We cannot afford to pay our bills.”
Andrew Hemming, Farmers for Action

In September, Muller/Wiseman announced it was increasing its farmgate milk price to 29p/litre, which took effect from 15 October.

But Mr Hemming said the cost of producing milk had increased to 31.7p/litre and at the very least farmers were looking for further price increases that reflected this before the end of the year.

“Dairy farmers have suffered five months of producing milk at a loss. We cannot afford to pay our bills,” he added.

“Luckily, the single farm payment looks like it will be paid to farmers a little earlier this year, which will take the pressure off.

“However, soaring feed costs mean dairy, pig and poultry farmers are facing a winter of discontent. Essentially, dairy farmers need a milk price that reflects at least the cost of production and a little more.”

Mr Hemming said farmers who were not happy with the price they were being paid for their milk should exercise their right to change milk buyers under the terms agreed in the voluntary dairy code of practice for contracts for milk supplies.

Following the protest, Müller released a statement, which lambasted farmers for their “wildcat, militant actions”.

“We have no issue with peaceful protests, but unlawful blockades which effectively close down our factory simply hand the impetus to companies who employ few in Britain and do not use milk sourced from British farmers.”
Ronald Kers, Muller UK and Ireland group chief executive

Ronald Kers, Müller UK & Ireland group chief executive, said: “Farmers for Action appears to accept that large farmer owned co-operatives and cheese-makers are unable to return comparable milk prices to farmers who supply them because they are struggling to compete with imported Irish dairy products.

“But they are not applying the same logic to yogurt makers in Britain despite overseas competitors spending millions advertising products made with milk sourced in Europe where farmgate milk prices are lower.”

Mr Kers added Muller remained committed to growing its business in Britain and will return a leading milk price to dairy farmers who supplied the company.

“We are midway through a collaborative project with farmers which aims to find a new way of valuing farmgate milk in the future,” he said.

“But far from reducing the amount of imported dairy product we are at risk of giving away Britain’s share of the yogurt market to competitors if our operations are repeatedly targeted by wildcat militant action of this kind.

“We have no issue with peaceful protests, but unlawful blockades which effectively close down our factory simply hand the impetus to companies who employ few in Britain and do not use milk sourced from British farmers.”

While the protest was ongoing, up to 400 more farmers packed into Skipton Market in Yorkshire at around 8pm for a dairy coalition meeting, attended among by FFA chairman David Handley and NFU dairy board chairman Mansel Raymond.

Speaking after the meeting, Mr Raymond said: “The dairy coalition is strong. We are working together to try to achieve further milk price increases this year.

“Further milk price increases are desperately needed on the back of massive increases in costs of production.

“There has also been a massive fall in milk production on dairy farms in the UK. This is only going to get worse as the winter goes on.

More transparency was needed from milk buyers on how milk pricing policies were structured, he added.

Further meetings between Ronald Kers and Farmers for Action representatives are planned to take place on Friday (26 October).

Read the latest news on the milk crisis