Dairy farmers have staged a second night of renewed direct action as part of continuing protests over milk prices.

About 100 dairy farmers used 20 tractors and other farm vehicles to blockade a huge Morrisons supermarket distribution centre by the A5 in Somerset.

The protests were led by Farmers for Action (FFA), which said the low cost of milk in supermarkets is partly responsible for driving dairy farmers out of business.

FFA chairman David Handley handed in a letter to Morrisons, addressed to its chief executive Dalton Philips, explaining why they had decided to act. 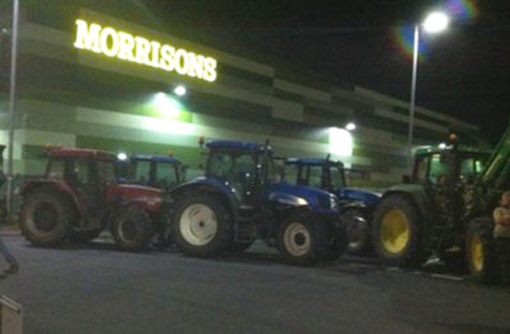 Mr Handley said: “The letter stated it was with deep regret that we had decided to protest at one of Morrisons’ five star distribution centres.

“The reason that farming families had turned up was very simple; most dairy farmers over the past three months have seen no milk price increases despite the fact that global markets are at an all time high.

“Last year, it was agreed by all parties in the dairy chain that dairy farmers who have to take the lows in the market place should also benefit from the highs.

“This is clearly not happening and leading milk processors who supply supermarkets, like Morrisons, with an array of dairy products, tell us they are refusing to negotiate a deal and, in fact, are trying to reduce prices by playing one processor off against the other.”

Mr Handley added that money was “pouring into the dairy supply chain through high market value of products”, but supermarkets and milk processors were “refusing to pass it on”.

FFA is demanding that major processors and supermarkets work together to raise the milk price to a minimum of 33p/litre, but preferably 35p/litre across the board so farmers can make a “bit of profit”.

It said farmers were being paid 31p/litre on average for their milk, but some were receiving as little as 27-28p/litre.

The NFU is not supporting direct action and would prefer that any differences between processors, supermarkets and farmers over prices were settled by negotiation.

Demonstrations also threatened to paint farmers in a bad light, he added.

But Mr Handley said: “We asked the silver commissioner for Avon and Somerset Police whether the milk protests on Thursday night would take any away any police resources from the cull and he told us it was not an issue.

“If our actions were going to cause any issues over the policing of the badger cull then we would have left immediately.”

He added: “It’s a sad state of affairs that it has come to this and we’re sorry that the union is not supporting us.

“The retailers are telling us one thing and the processors are telling us another (over milk prices). The only way you are going to flush this out is to put the pressure on and see what comes out of it.”

A Morrisons spokesman said: “We buy the milk sold in our stores directly from a processor, who set the price received by the farmer for each litre they produce.

“The increases we have made in the amount we pay to processors since last summer have resulted in a rise of more than 4p/litre for farmers, bringing milk prices to their highest level in recent years.”

However, a Farmers Weekly analysis of the milk market on Friday (30 August) found average farmgate milk prices well below where they should be given the improved performance of global dairy markets.