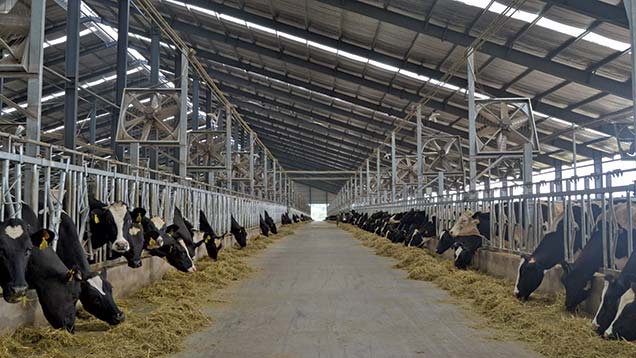 It looked like the kind of newly built, well-run dairy farm you could find anywhere.

Inside a vast shed with open sides, 1,000 Holstein heifers with new, yellow ear tags and shining coats were calmly eating silage. The concrete floor showed the dust streaks from being freshly swept and the steelwork was clean and bright.

Only the rows of metal fans hanging from the roof hinted at a difference. It was mid-September, but they were intended for the summer, when temperatures creep above 30 degrees and the humidity is uncomfortably high.

The scene might have been familiar to British farmers. The story behind this south-west China dairy farm is anything but.

Xinbaijan Farm belongs to New Hope Dairy, subsidiary of enormous agribusiness New Hope Group. The US$8.8bn firm claims to be the biggest producer of animal feed in China, as well as having interests in chemicals and property. But now it is focusing on producing and processing meat, eggs and dairy itself.

Frustrated with the milk quality on China’s patchwork of small, family farms, New Hope is building a dairy supply of its own – from scratch.

It already owns 12,000 cows across seven farms and the one I visited was the latest.

My host was Dr Jiao Haopeng. Before working at New Hope he earned his PhD at Northern Ireland’s Agri-Food and Biosciences Institute.

Dr Jiao drove me an hour north of Chengdu, seventh biggest city in China and capital of Sichuan province. This was hardly dairy heartland, dotted by rocky hills and clumps of forest. Maize was being harvested in small, irregular fields and spread on the road to dry.

“It took two years to flatten the ground for the farm buildings. There was nothing before, just small crops growing,” Dr Jiao said. “It is hard to do in the south as it is more hilly.”

The determination to deliver a sustainable fresh milk supply in the Chinese south stretches beyond rearranging the landscape.

The heifers were bought in Uruguay. They spent a month on a ship, 45 days in isolation at the harbour before travelling three days overland on the back of a lorry. Dr Jiao admits “they are quite distressed” when they arrive. Including transport, they cost £2,000 a head.

A lack of extensive pasture in the surrounding area means the cattle are housed year-round. The diet of maize silage is supplemented by oat grass and lucerne (pictured), both of which are imported from the USA.

Holstein semen is also sourced from the US. At £28 a tube it is four times as expensive as local equivalents but New Hope wants the best.

This farm employs 45 staff, including a manager, his assistant, a financial manager, a chef and four cleaners. Most of them live on site in a purpose-built accommodation block (pictured). There’s a basketball hoop outside.

Hygiene is a high priority. At the farm entrance, Dr Jiao’s 4X4 has to be sprayed with disinfectant. Visitors have to put on hairnets and bright blue shellsuits as they walk around.

All this investment makes New Hope’s milk expensive. The cows are expected to yield about 8,000kg a year. In September, the company’s farms had an average cost of production of 4.34 yuan a kg (45p/litre), 70% of which was feed. It sounds excessive but Chinese milk prices are on a different scale: New Hope’s factories pay its farms 4.89 yuan a kg (51p/litre).

Dr Jiao said Chinese milk prices would come back from those levels, forcing some units to get a grip on costs.

“People want milk and the huge demand caused the price to go up and up, so the companies just import the cattle. Maybe they do not consider carefully the cost of the land and the feed. With the price going down they have to think how to control the cost.”

New Hope has plans for another three farms next year and the Xinbaijan unit will double in size. But it won’t be matching the 39,000-cow dairy run by one of its rivals. Dr Jiao describes a company-wide awareness of the environmental impact of large dairies. The main problem is slurry, particularly in a province like Sichuan where there’s little space to grow grass or crops. As in the UK, there are government restrictions on spreading.

“Our boss said we only build 3,000-5,000 cow farms. We do not want farms over 5,000 because of environmental rules and high costs for management,” Dr Jiao said.

Back in Chengdu, in a riverside teahouse, Dr Jiao described his country’s fast-growing appetite for dairy products. Chengdu might be 5,000 miles from London but it’s reckless to ignore the dynamics of Chinese demand. The UK is not a big exporter to China, like New Zealand or Australia, but Chinese buyers stepping away from global dairy markets has been one of the main reasons why prices have collapsed.

The Chinese don’t do dairy like we do in the UK. The average Chinese eats about 20kg of fresh dairy products a year. The amount has doubled in the last decade but most developed countries have individual consumption of about 100kg a year. Cheese is exceptionally rare. The countless Chinese herbal teas don’t need milk.

But the government wants its 1.3bn people to eat more dairy for nutritional reasons. Baby formula is the big craze, with Chinese mothers only breastfeeding up to six months at the latest. And the expanding urban middle class is starting to pick up products like liquid milk and yoghurt.

“My parents did not drink milk when they were young,” said Dr Jiao. “Our generation do, especially as they move into the city. I drink it every day.”

So where will that milk come from? The 2008 melamine scandal lingers in the Chinese public memory. Almost 300,000 people fell ill after drinking milk tainted with the chemical. Six babies were killed. The crisis rattled the population’s faith in domestically produced milk, switching people to imports.

That appears to be changing, with Chinese dairy businesses placing an emphasis on quality and security, as well as scale.

“With the scandal, all the customers did not trust our companies,” Dr Jiao said. “Now it is better and we can build everything from there.”

Talking to Dr Jiao, it sounds as if China wants to end its reliance on imports for good. Expertise, machinery and genetics have been bought from abroad. Chinese businesses in more fertile provinces than Sichuan have begun growing forages to supply the dairy companies. China is about 75% self-sufficient in dairy at the moment, but, in a country with so many hungry mouths, that’s still a huge opportunity for importers.

When I pushed Dr Jiao on the ultimate aim, his answer hints at a bold, if vague, ambition for his industry.

China’s dairy consumption is expected to rise 38% by 2022 and dairy imports could increase 20%, according to the Institute for Agriculture and Trade Policy in the USA. Despite Dr Jiao’s optimism and general Chinese bullishness, self-sufficiency remains a long way off.